An Indian immigrant to America discovers the true substance of the religion of his youth. 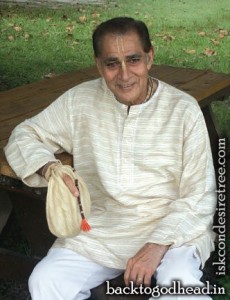 I am Indian by origin, but I came to the U.S.A. as a graduate student in January of 1964. I was part of the first wave of immigrants from my country, and we all found this place very different. So many colors of people and so many types of landscape. Above all, there were so many opportunities. In America, even a janitor could own a car!Of course, more opportunities meant more ways to engage in sinful activity as well. Although I was raised as a vegetarian and even attended a strictly vegetarian college in India, I never really knew the reason. So when I got my graduate student visa to attend the University of Arizona, some of my relatives in India decided to give me practice in eating mutton and chicken before I left. They kept telling me to get used to it, because meat was all that was available in the U.S.

After graduation, I stayed in New York for five years, from 1967 to 1972. There I was told about a place that looked like a Hindu temple you might find in Bombay but full of white Americans. Since there was no other place to worship nearby, I decided to check it out.

One weekend, I went to Henry Street in Brooklyn and discovered the Hare Krishna Sunday Love Feast. I didn’t recognize most of the mantras being chanted, but when I heard the last phrase of the prayer to Lord Nrsimha jaya jagadisa hare I thought I must be in the right place.

I was used to visiting temples and seeing holy people, but I was amazed at how dedicated and happy these Western devotees were. That first visit would not be my last.

As one of the “senior” Indians in New York (and as one of the few owners of a car), I used to take newly arrived friends and relatives around to interesting places in the city. The Henry Street Hare Krishna temple quickly became one of the standard attractions on my tours, especially since my guests could get free Indian food.

One day, however, was especially memorable. As I entered the temple, I was surprised to see an Indian sadhu sitting at the front of the room, being fanned by two devotees. Although I had seen many such persons before, he looked especially serious and focused. Still, the first thought that came to my mind was “Here is another Indian who has come in America to make dollars, just like me.” Nevertheless, as I heard from Srila Prabhupada on this and a few other occasions, his speaking was so powerful, and the chanting he led so joyful, that I started to realize there was a difference between the two of us after all.

Marriage to a Pious Hindu

After working for a few years in New York and other cities, I returned to India to get married. I was keen on finding a pious girl interested in religion. Not only had my visits to the ISKCON temple impressed me, but I had also been reciting the Hanuman Calisa every Tuesday and Saturday for many years, ever since my mother had recommended it as a cure for depression. Among the several girls I met, one came from a family of faithful Durga worshipers. She had also been raised vegetarian, and she would fast every Tuesday, since that is Durga’s day. (At that point, I wasn’t so particular about whom she worshiped, as long as she worshiped.) I expressed my interest, and things moved quickly after that: I met Pushpa my first Tuesday in India, the following Tuesday we were engaged, and the next Tuesday we were married. When she joined me in America, we bought a house in Cleveland, Ohio. I chose a place near the local ISKCON temple, and even though we did not follow the regulative principles so rigidly, I made sure we attended the Sunday feast every weekend.

Over the years, one of the most appealing things to me about the Hare Krishna movement has been how everything that the devotees do is rooted in the same Hindu tradition I grew up with, but somehow they make everything clearer and more meaningful. Whereas I used to attend püjas only on special occasions, devotees go to the temple to chant and worship everyday, or even several times a day. What is more, they have a clear purpose in mind to please the Supreme Lord Krishna and grow closer to Him whereas I used to do religious things mostly out of tradition and habit. Now, I truly relish my daily chanting and reading, through which I feel God’s presence with me always.

Another difference is the lectures. In every other Hindu temple I’ve ever been to, the featured speaker gives a discourse usually with jokes and popular songs interjected and then everyone leaves. But in ISKCON, hearing is serious business. After every class, the speaker will ask for questions. This caught me off guard the first few times: Was I supposed to really be listeningn I thought just being there was enough. Now, I really enjoy and appreciate the opportunity to learn, and I am a regular inquirer.

The biggest difference between the Hinduism I was familiar with and Srila Prabhupada’s Krishna consciousness has to do with the issue of personalism. Only in ISKCON did I learn the truth behind the different devas and the actual nature of God; everywhere else these topics just got waved away with a quick “Everything is one.” I have even developed a “Mayavadi Diagnostic Test” [see sidebar], which I use to help my relatives and other Indians understand the difference between personalism and impersonalism.

For these reasons and more (like prasadam!), I continued to regularly attend feasts and festivals at my local Hare Krishna temple through both the birth of my two children and our family’s eventual move to Irvine, California. Here, the closest temple is in Laguna Beach and is presided over by Sri Panca Tattva (Caitanya Mahaprabhu and His four main associates). The president at the time, Bana Haridasa, and his wife, Kosarupa, eventually convinced my family to become vegetarian and to enroll as ISKCON Life Members. We then made further spiritual progress when we started attending the Nama Ha††a programs of Nirantara Dasa every weekend, held in homes throughout southern California.

The final step in my capture by Krishna was when I met my spiritual master. I’ve always been interested in shooting home videos, so when we hosted His Holiness Bhakti Caru Swami for a home program in 2000, I asked how I could participate in his film biography of Srila Prabhupada, Abhay Charan. I thought he would let me be part of the camera crew, or even perform, but instead he said he was looking for a mature person to drive around the main actor, Somayajulu. I decided to take the assignment, and somehow being in the association of devotees day and night for three weeks inspired me to maintain the regulative principles and chant sixteen rounds on my beads like everybody else.

Over this same time period, I felt inspired by Bhakti Caru Swami, and in June of 2003 my wife and I took initiation from him at the New Dwarka temple in Los Angeles. Since that time, my devotional life has become much more active. I’ve found a novel and interesting way to learn Bhagavad-gita and Srimad- Bhagavatam in the form of Nirantara Dasa’s home-study program. He has created open-book tests based on the English translations for each chapter in these scriptures, and he sends and grades them via e-mail.

I also try to share Krishna consciousness with those I meet. When I go for my daily japa walk, people often initiate a conversation with me when they see my bead bag. Usually they think I’ve broken my hand, but then I explain the chanting to them and give them an invitation to the Laguna Beach temple. Once, the manager of a local supermarket asked about my neck beads. I told him they were made from a special plant called Tulasi, which grows in India and is spiritually powerful. He wanted to know where he could buy some for himself, because he was going through a divorce and was feeling very stressed. I brought him a spare set the next day, and when we met several weeks later, he thanked me. He has even started chanting.

As for the future, I am currently working toward getting second (brahminical) initiation, and I’m also trying to plan the vanaprastha (retired) stage of my life. My wife and I got so much out of participating in the thirty-day Vraja Mannala Parikrama that His Holiness Lokanath Swami organizes every year that we’re thinking of moving back to India. Although it is tempting to live in either Vrindavan or in my spiritual master’s home base of Ujjain, thanks to Srila Prabhupada I know I will be able to make spiritual progress wherever I go. And I’ll never forget that it wasn’t until I left India to come to America that I learned what my native culture was really all about.