Saved from the Clutches of Maya

“My father and the coach at UCLA were pleased with my volleyball successes, and my mother was satisfied with my academic work. But I wondered if Krishna was pleased.”
I was born in Los Angeles in 1949. My parents were avid volleyball players. My father had been one of America’s best, and my mother had been a third-team All-American. I started playing volleyball when I was for. I passed through school easily. Sports dominated my free hors, and generally my childhood was a happy one. With adolescence came dating and more sports, and I left high school with a scholarship to UCLA. 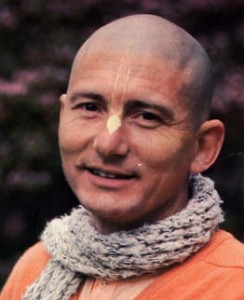 Although I was very happy about becoming a devotee, I tried to look at Krishna consciousness objectively. My reasoning went something like this: If Krishna is real and His promises for bliss in the afterlife are valid, then accepting His instructions brings gain; conversely, rejecting them brings loss. If Krishna consciousness is not real and the soul does not exist, then afterlives are meaningless and only this life counts. If only this life counts, then gaining pleasure here is the goal. Since the pleasure I’m experiencing now is at least equal to that achieved from worldly pursuits, I have nothing to lose but everything to gain in Krishna consciousness.
I also reflected on the economics law of diminishing marginal returns, which states that the more one tries to enjoy a material things, the less one enjoys each successive unit of that thing. On the other hand, Krishna teaches that spiritual pleasure is an unlimited ocean of expanding joy. Repeated experience had convinced me of the truth of the former statement, while the latter proposition was beginning to sound tenable; undoubtedly, the more I became involved with Krishna consciousness, the more I liked it.
I moved into the temple the next Sunday. Despite the austerities, I felt at home with Krishna and His devotees. My parents felt betrayed, though. “What in God’s name are you doing?” my mother asked.
I was as shocked as they were, since honestly the last occupation I’d ever expected to adopt was to be a Hare Krishna devotee. Only a week before I didn’t know a svami or yogi from a fire-eater or a cartoon bear. It must have been the causeless mercy of Krishna that arranged everything so swiftly.
On my very first morning at the temple, after breakfast I reported for duties to the temple commander, Visnujana dasa. “Please go and find Ekendra,” he said, “and he’ll show you how to wash Krishna’s cars.”
I found Ekendra, a five-year-old boy outside near the cars. A little amused, I spoke up, “I’m supposed to help with the cars.”
“Yes,” he said, “take that bucket with the soapy water and sponge and rub of all the dirt first.”
I happily did as I was instructed, somewhat marveling at the efficiency level here. We talked a bit while cleaning, and he asked me a question about Krishna philosophy. I answered, “Well, I’m not sure, but I think…”
“Don’t speculate!” He interrupted.
That was first day’s lesson.
The next month we all joined Srila Prabhupada in San Francisco for the annual Ratha-yatra parade and festival in Golden Gate Park. Just before the procession was to begin, someone brought Srila Prabhupada the first ten copies of the two-volume hardcover Krishna book, fresh from the printer in Japan. He showed them the crowd, drawing their attention to the one hundred pages of paintings, depicting Krishna’s pastimes on earth five thousand years ago. We had only heard of these stories, and everyone was ecstatic to behold the wonderful books.
Then Srila Prabhupada said, “I’m going to sell them for $10 each. Who would like to buy?”
This was the first time I felt a little remorse about having donated all my money to the temple. I didn’t have a penny. And to make it worse, a friend of mine from high school, Tom, happened to be there, and he immediately bought a Krishna book. He wasn’t even a devotee! But he got the mercy anyway, directly from Srila Prabhupada’s hands. In a few minutes all the copies were sold, with not one left for the author.
One of the most memorable parts of the festival was meeting Jayananda dasa, its organiser. He was a transcendental John Wayne. He was marvelous. Big, strong, and friendly, he built the forty-foot-high chariots, got the permission for the festival, arranged for the decorations, the feast, the advertising, and so on. He slept under the cart at night with a band as assistants, and he could solicit dozens of passers-by into helping with the preparations for Lord Jagannatha’s festival. I asked him a question:
“How do you become happy?”
“I don’t know,” he innocently replied. “I’m too busy to think about it.”
But he was always blissful and active, working tirelessly, and he inspired others to do the same.
After the festival, back in Los Angeles, Bob continued to nurse me during my early days, with his friendliness and quotations from scripture.
One day he announced that this day would be the most important day of his life his initiation by a bone fide spiritual master. He received the name Madhukanta dasa. I, too, was initiated by Srila Prabhupada some months later with the name Danavira dasa, “the servant of the hero of charities.”
Srila Prabhupada wrote to me, “You have a very dear friend in Sriman Madhukanta, for he has actually saved you from the clutches of Maya [illusio]…. Be very firm in your vows….”
Share This