An Impersonator Gets Caught

He’d never take the Hare Krishnas seriously or so he thought.
[Rupa Gosvami and Sanatana Gosvami said to Lord Caitanya]: “Jagai and Madhai had but one fault they were addicted to sinful activity. However, volumes of sinful activity can be burned to ashes simply by a dim reflection of the chanting of Your holy name. Jagai and Madhai uttered Your holy name by way of blaspheming You. Fortunately, that holy name became the cause of their deliverance.
(Caitanya-caritamrta, Madhya, 1.194-195)
FIVE YEARS AGO, while still in high school in Honolulu, my friend Brian and I decided to dress as Hare Krishnas on Halloween. We got some white sheets and dyed them orange. I wore a woman’s stocking on my head to make me look bald, and Brian wore a rubber wig with a ponytail. We borrowed tambourines from someone in our high-school band.
We went to school in our costumes. We got a lot of attention. Brian and I had the same American Studies class. No one could concentrate. Everyone kept looking at us. Our classmates asked, “What are you?”
“We’re Hare Krishnas, don’t you know?”
When nightfall came, we went to Kalakaua Avenue. On Halloween, the police close the streets to traffic, and thousands of costume-clad Hawaiians and tourists mob the street. We started to shake our tambourines and give out flowers to people. “Hare Krishna. Here’s a flower for you.”
Close Encounters of the Spiritual Kind
An hour or so went by. Off in the distance we heard the sound of karatalas and drums. From out of the crowd came a jubilant group of Krishna devotees chanting the maha-mantra. Brian and I were shocked. We were afraid they would be angry with us for impersonating them.
The devotees saw us. There was a strange moment of silence. Then one of the devotees approached us. He said, “Hare Krishna. Yeah, we thought someone like you would be down here.” Instead of shouting at us, they asked us to join them! They taught us the words of the maha-mantra: Hare Krishna, Hare Krishna, Krishna Krishna, Hare Hare/ Hare Rama, Hare Rama, Rama Rama, Hare Hare.
We began to chant. The devotees filled our tambourines with prasadam cookies to distribute.
We tagged behind the party, chanting and dancing. As we handed out cookies, we said, “Yeah, we’re the real ones. These guys are posers.” As we chanted, we changed the words of the mantra. It was complete blasphemy. Still, we were having fun.
We chanted for three hours. Finally, the devotees went home. One of the devotees asked, “So, are you ready to join up? Are you ready to come with us?”
“Yeah, right,” I thought. “Never in a million years.”
Midnight Chanting
We met another friend, Cherise, around midnight. We gave her an orange sheet and taught her the maha-mantra too. The three of us chanted and danced along Waikiki.
Most people were amused by our imitation kirtana, but some of the ghouls and goblins got ugly. One burly, angry drunk ripped the wig from Brian’s head. Brian and I were petrified. Cherise was outraged. She poked him in the chest, “You give that back, mister!” He relented. Off we went again, hairstyles intact.
Hoarse and thirsty, we drove to a nearby shopping center. We entered the Rose City Diner, a ’50s fast-food joint, bustling with witches, warlocks, ghosts and other creatures of the night. “The Monster Mash” blared from the jukebox.
We were parched and broke. Shaking my tambourine in outstretched arms I approached the manager at the counter, “Hare Krishna. Hey, will you give us free sodas if we get up on the counter and chant and dance?” He agreed.
We got on top of the long formica countertop, and belted out the maha-mantra for everyone to hear. The patrons laughed and applauded. We got our sodas and headed for home. Our chanting trio had been out for more than two hours. Blissful and exhausted, we made it home at three A.M.
For the next several days the maha-mantra kept echoing through my head Hare Krishna, Hare Krishna, Krishna Krishna, Hare Hare/ Hare Rama, Hare Rama, Rama Rama, Hare Hare. It was pleasurable, but I was afraid. “This is addictive. I’d better stop before I become one of them,” I thought. I pushed the maha-mantra back into my subconscious and forgot about it.
Soul Searching
I finished high school and began attending MIT. I joined a fraternity and soon entered the fast lane of college life women, alcohol, and hard drugs. By the middle of my freshman year, after hitting bottom, I began to search for spiritual knowledge. I studied martial arts, different systems of meditation, hatha-yoga. I read the Bible. I took a course on Asian religions, which included a study of the Bhagavad-gita. 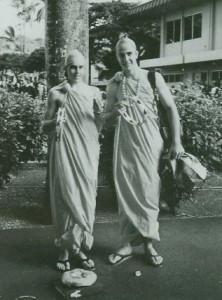 One day, a fraternity brother came home and said, “Here, I got this from some guy on the street.” It was Srila Prabhupada’s Message of Godhead. I looked at the striking picture of Srila Prabhupada on the back. I was frightened by it. I put it away and continued my mishmash of pseudo-spiritual pursuits.
Then last May, at the end of my sophomore year, I met Bhakta Sashi from the Boston temple in front of the student center at MIT. He was distributing Srila Prabhupada’s books and invitations to the temple. I spoke with him several times at his book table. I would needle him, but he was always kind and reasonable in answering my questions.
During my summer break in Hawaii, I read the cookbook The Higher Taste, which Sashi gave me. Inspired by it, I offered some food to Krishna. I had never tasted anything like it before. I started to offer more of my food. I became convinced: “I have to go to the temple.”
When I returned to MIT last fall, I was depressed. My then-girlfriend had just left for college. I had broken ties with my old college fraternity. I felt like I was in limbo. I had lost the temple’s address, so I walked up and down Commonwealth Avenue. I couldn’t find the temple.
I went home and read The Higher Taste again. I read about the maha-mantra. “Oh, no, I’m not going to start that again!” But it said that chanting the Hare Krishna mantra is the only shelter. So I went for a long walk and I started to chant. Immediately, all my troubles melted away. As I walked down Commonwealth Avenue I prayed to Krishna, “Please let me find this temple.” I detected the fragrance of sandalwood incense. I looked across the street and I saw the temple. Krishna was reeling me in …
The next day was Sunday. As I rode my bike toward the temple, I saw a devotee chanting on his beads on the steps. “No,” I thought, “I won’t shave my head!” I peddled past.
But I came back the next week. Inside I found a warm, friendly atmosphere and that all-addictive mantra: Hare Krishna, Hare Krishna, Krishna Krishna, Hare Hare/ Hare Rama, Hare Rama, Rama Rama,
Hare Hare.
I’ll remember that day for the rest of my life. It was beautiful. I felt like I was home. I remember thinking, “I don’t want to leave. This is nice.”
During December, I visited the Honolulu temple for the first time. On Saturday night the devotees packed into the van to chant Hare Krishna on Kalakaua Avenue. On the way there, I told a devotee about that Halloween five years ago. He said, “I remember you.” It was the same devotee who had given us the cookies and taught us the maha-mantra.
Another devotee explained that as they were going home that night they were saying, “These guys think it’s pretty funny that they’re out here imitating devotees, but I’ll bet you at some point they’ll become devotees.”
Or at least they’ll try …
Bhakta Sean moved into the Boston temple in December 1994. He’s now back in Hawaii, teaching the maha-mantra to people on the island of Kauai.
Share This