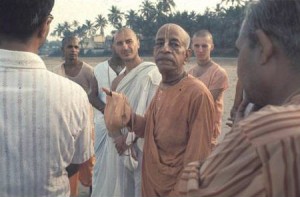 Haridas’ life in Mumbai as a young boy- Haridas Prabhu was a boy aged 11 years, used to beg for money, work in a tea stall to wash glasses, just to get some food, he sometimes used to get money when mercy was shown upon Him, He used to wash taxis for 1 anna (quarter of a rupee, an Indian currency of that time). He also used to pickpocket and steal things just to go to jail as they provide some basic necessities in jail like blanket, food, toilet facility etc. so, he used to do paltry crimes in order to get into jail like black marketing of cinema tickets; he also used to travel without tickets in local train and stand in front of TTE, so that they would put him into jail. They used to ask him if he had the same activity? (WHAT DOES THIS MEAN???) Haridas recalls one of his early days experiences in Mumbai telling that people in Mumbai used to be very nice and civilized and used to help each other. Once while Haridas was begging at the railway station, a lady looked at Him while returning home from work, she went to Her house and came back with ‘paranthas’ cooked for Haridas and told him that she felt he would be hungry. Such was the attitude of people in Mumbai 40 years back.

Haridas Life in jail-It was one of Haridas Prabhu’s days in jail in the month of March in the year 1972 at around 2 PM-3 PM in the afternoon. At that time the ‘Back to Godhead’ magazine which was published only in English language at that time was thrown into dustbin by someone. Haridas was in jail at that time and his work in the ward was to clean the dustbin everyday, where he found this issue of the ‘Back To Godhead’ magazine having a picture of Srila Prabhupada on the front page, Srila Prabhupada was wearing a very beautiful watch in that picture.

Haridas Prabhu got attracted towards that watch of Srila Prabhupada in that picture and decided to steal it. Haridas made that ‘watch’ as his next target. Haridas used to fix ‘targets’ in those days for ’stealing’. Haridas followed the address written on that magazine which took him straight to ‘Akashganga’ (name of the building), on the same day of his discharge from the prison, and this was the place where ISKCON was operating in those days
(1971-1972).’ Akashganga’ was near the Breach Candy Hospital, opposite the American Consulate.

When Haridas reached ‘Akashganga’ on the day of his release from the prison itself and he came to know that the ‘Hare Krishna Movement’ had shifted to Juhu. He headed to Hare Krishna Land in the later afternoon. It was like a forest at that time but a small hut was there. Haridas as a small boy saw devotees like His Grace Jagat Purusha das Brahmachary ( an American ) and His Holiness Giriraj Maharaj coming out with some devotees.

Haridas showed the picture to Jagatpurusha Dasa Brahcmachary and asked- “Where is Srila Prabhupada?” (showing him the picture).

Jagatpurusha said, “Srila Prabhupada is not in Mumbai, but he will be coming soon.” 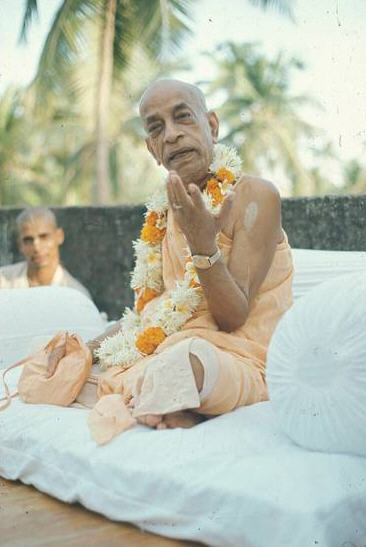 Haridas planned to stay in ‘Hare Krishna Land’ to wait for him; Haridas acted as a ‘fake devotee’, so that He would get a place to live and shelter, food etc. After staying at the ‘Hare Krishna Land’ for 4 days, His Holiness Giriraj Maharaj insisted Haridas to get His ‘head shaved’ and Haridas did so. As long as Haridas lived in ‘Hare Krishna Land’, everyone loved him and treated him with love and affection. Devotees at ‘Hare Krishna Land’ at that time had very good dealings with Haridas; they gave Him food, shelter and all his needs. Haridas forgot all His bad habits while he was in the temple, he forgot all about ’stealing’ and changed his mind. He got engaged in devotional service and started attending all the temple programs. Haridas told everyone in the temple that he had been in jail and that he was a thief. His Holiness Tamal Krishna Maharaj points out that Haridas must be 13-14 years old at that time. One of those days in temple Haridas Prabhu Ji was told by someone that Srila Prabhupada had come to Hyderabad.

Haridas told His Holiness Giriraj Maharaj that he too wanted to go to Hyderabad to have darshan of Srila Prabhupada. His Holiness Giriraj Maharaj told Him that there was a lot of service to be done in Juhu, Mumbai temple; so He could not go, but Haridas Prabhu was firm in His desire of having ‘darshan’ of Srila Prabhupada, and everyone else was also going. Haridas told Maharaj that he should let him go to Hyderabad or Haridas would just steal money from temple and go anyhow, with or without his permission. Haridas fell inth an argument with maharaj, who finally had to let Him go.

This is another small pastime which happened in Mumbai during 1970s. A pastime between Srila Prabhupada and his loving disciple Shri Haridas Prabhu. It was narrated personally to Premanjana Dasa (Pranjal Joshi) by Hari Das Prabhu on August 28, 2011 at his room in Hare Krishna Land, Juhu Mumbai. This pastime of Srila Prabhupada demonstrates the care Srila Prabhupada took in dealing with his disciples. It will surely serve as a lesson to remember for the devotees who never saw Srila Prabhupada yet always felt His presence in His Divine books. Sriman Haridas Prabhu has been serving the lotus feet of His beloved spiritual master Srila Prabhupada and Shri Radha Rasa Bihari Ji for over 40 years now. Haridas Prabhu invested many years of his life in serving Srila Prabhupada, isolating Himself from the material crowd and other devotees. He just made up His mind to tell me personally about the bond and very special relationship he still shares with His Divine Grace. He has moments to spare and words to speak. He spoke what his heart felt and how he just loved Srila Prabhupada.

As everybody knows Haridads Prabhu came to steal Srila Prabhupada’s watch and the rest is history. He became a devotee after that by the mercy of Srila Prabhupada. Haridas Prabhu says, “This story is going to be a “textbook story” for future ISKCON devotees.”

Haridas Prabhu had the habit of stealing money from the temple, he had a habit for stealing. He used to get money for the deity kitchen, devotee kitchen etc. As a habit, he generally used to steal Rs. 1 or Rs. 2 (in 1972) it used to be a ‘very big thing’ at that time.

There was one such incidence that Haridas recalls, “Srila Prabhupada was here as he used to come to Hare Krishna Land. I used to get extra money for buying fruits and vegetables for the deity kitchen and Srila Prabhupada kitchen. So one day when I went for shopping, he saw a huge hoarding
(billboard) for Cadbury’s 5-Star chocolate. I bought some chocolate from the money I stole from the ‘laxmi’ I used to get for purchasing vegetables for the kitchen. I stole Rs. 5 from the deity kitchen to off load the fruits and vegetables and went to Srila

Srila Prabhupada said, “What is this?”

Haridas Prabhu had no means to escape or lie as he was caught red-handed. So

he gave one chocolate as bribe to Srila Prabhupada.

Srila Prabhupada took one bite from the chocolate.

Then Srila Prabhupada said, “What have you given to me?” (Spontaneously)

“Show me the packet. It has coco!” Srila Prabhupada said looking at the ingredients. “We don’t have coco. Why do you eat all this?”

Haridas Prabhu said. “This is sweet.”

After having made so much offence and being caught red-handed, Srila Prabhupada gave him ‘halwa’ as the ‘punishment’. 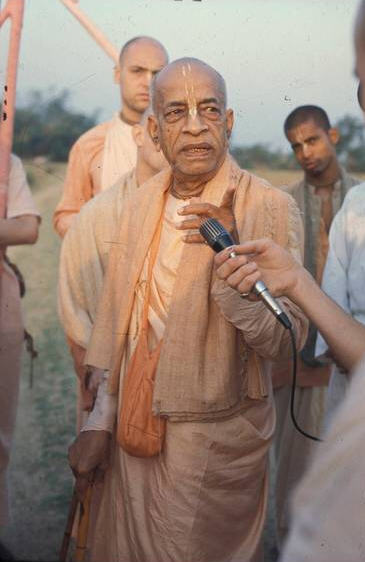 Haridas says, “Srila Prabhupada always gave a higher taste just to help us to give up lower taste”.

Srila Prabhupada always used to give this example if you want someone to leave ‘guru’ you give Him ‘rasgulla’.

Haridas says, “This is how Srila Prabhupada taught us preaching, He taught by example. Not just by speaking on Krishna.”

That day Haridas stopped eating chocolates but did not give up stealing
(Halwa incidence).After a long time of 1.5 years, temple gave more money to Haridas for purchasing ‘construction materials’ .

One day Haridas stole Rs. 60 (this was the highest amount stolen by Haridas and used to be a big amount in those days). In summer afternoon Haridas took

a shower and slept with His ‘wet towel’ on, on a wooden bunker with the ’stolen money’ in His hand as Haridas forgot to hide it.

His Grace Jagatpurusha Dasa Brahmachary saw the money in the hand of Haridas and took it from Him. Jagat and Haridas now had a tussle with each other over this.

Jagat Purusha was a tall American Brahmachary who was very sweet and soft spoken. He was a nice gentleman. Jagat hen texplained it to Haridas, that stealing the money coming to the temple and using it for ‘personal use’ was as bad as chewing the flesh of your spiritual master.

By then, Haridas who had already fell in love with Srila Prabhupada, felt very bad and guilty. Haridas started feeling that he was chewing the flesh and meat of Srila Prabhupada. Haridas felt very, very bad. He decided that He would not steal from the temple anymore. Jagat Purusha is somewhere in England these days and visits Haridas sometimes.

Then the ‘Monkey Business’ of Haridas was on ’stealing from outside and bringing that into the temple’. Thus, this incidence changed the stealing habit of Haridas forever, who would now bring money into the temple by stealing. This incidence would serve as a lesson to those who steal from the temple; they should also feel that they are chewing the flesh of their own spiritual master (Srila Prabhupada).

Anyways, Haridas Prabhu Ji is indebted forever to His Grace Jagat Purusha Dasa Brahmachary who was his greatest teacher. Jagatpurusha who is still that same sweet, kind and loving gentleman does not even remember this incidence but Jagat says that Haridas Prabhu must be right in saying that this incidence has actually happened.

[This story has been written by Premanjana Dasa (Pranjal Joshi) on the basis of a conversation that took place between him and His Grace Hari Das Prabhu at the ‘Hare Krishna Land’ (ISKCON Temple) at Juhu, Mumbai in the months of August and September 2011 in the room of Haridas Prabhu ]