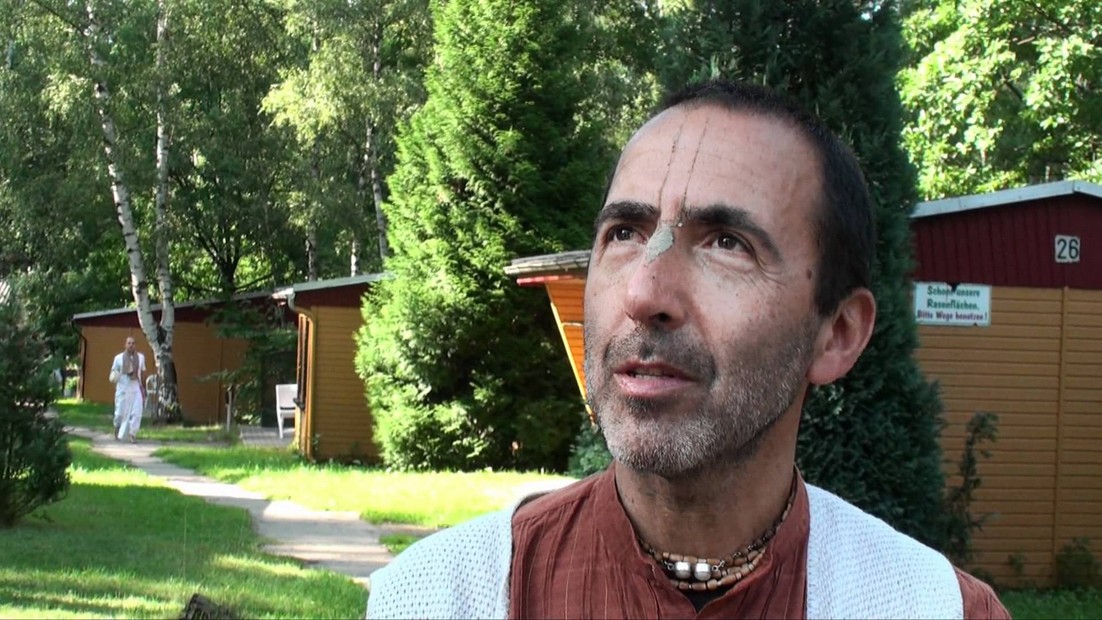 By Sarvatma Dasa Having had some mystical experiences as a teenager that convinced me of the existence of God, I left my native country, Argentina, for Salvador, capital of the Brazilian state of Bahia, famous for its mysticism and magic. I arrived in the area without plans, money, or acquaintances and moved into a straw hut by the beach a couple of miles from the nearest fishing village and fifty miles from civilization. It was an ideal setting of palm trees, a small lake, a river of crystalline water, and the turquoise Atlantic Ocean, in year-round eighty-degree weather.

I made a new friend there. He was reading the Bible and other books about God, playing music for God, and smoking marijuana to keep in touch with “the subtle world of God consciousness.” While I played saxophone and recorder, he would play guitar. We intended to satisfy God with our musical spontaneity.

I read a book by a Japanese doctor who claimed that everyone had inherent healing powers that could be awakened just by practicing austerities like fasting and chanting mantras. Since our eating depended on what God would send, fasting wasn’t unknown to us, although God would almost daily send someone with something to eat, or drop some green coconuts to the ground. To try to attain enlightenment, I was already planning to undergo a forty-day fast. So I followed the Japanese doctor’s program and, by the grace of God. I developed some healing powers. I could close wounds and heal minor afflictions.

My friend and hut-mate, David (as he wanted people to call him after the biblical character), made bamboo flutes, which we decided to try selling at the artisans’ market in Salvador. For the first time in months, I put on a shirt and sandals. I walked along the beach to the next village (there was no road) and caught a bus into the city.

Although the contrast between the city and the beach was shocking, my mind was peaceful because I was always thinking of finding the way to God. I walked around the market playing a flute. I sold a few and then went to the telephone company to make a long-distance call.

A young woman in a wheelchair waiting for her turn to use the phones attracted my attention. Here was a serious case I might be able to cure. Without hesitation. I went up to her and revealed my intentions.

“By the grace of God,” I said, “I have some healing powers that might enable you to walk. I’m not going to touch you or charge you anything, nor is it going to hurt you to try.” I waited for her answer,whichcame in a way I’d never expected.

“You are very kind in trying to help me,” she replied, “but you should also consider that I suffer no more pain than what your body gives you. I’ve been in a wheelchair since birth. I have never walked; nevertheless, I’ve always gotten where I wanted to go. This is the body God gave me after many past lives of sinful activities; therefore I deserve it. And more important than all this,” she added, “is that I, the person, live in this machine we call the body. I need spiritual, not material, help, and in spite of your good intentions, I don’t think you are ready to give that yet.” After saying this, she smiled and waited for my reaction.

I was dumbfounded. It took me a while to recuperate. Then I said, “What you just said sounds like the absolute truth, which I had not expected to hear from someone in your circumstances.”

My experience was that many persons confined to wheelchairs were easily irritated and seemingly resentful of their condition. I asked her not to go away. I wanted to make a call and return to talk at length. She promised to wait. When I returned I pushed the wheelchair outside and asked her where we should go.

“Let’s take a taxi to a restaurant,” she said.

“OK.” I said, thinking, Taxi? I never thought I’d ever ride in one again. I had the same feeling about going to a restaurant.

Once in the taxi she asked me if I was a vegetarian. I replied that where I lived there was no meat, so circumstantially I was. But why?

She explained that killing animals or eating them is sinful and should be avoided by all means. This made sense to me, and I promised her that I would become a total vegetarian. I could see that she was serious about spiritual life, so I asked. “Is there any other prohibition?”

I had given up sex entirely some time before, understanding that it doesn’t help in the pursuit of spiritual life. So I had no problems with that either.

“No intoxication.” she replied shyly, knowing from my long hair and beard that I was probably rather involved in this particular area.

“What do you mean by ‘No intoxication’?” I asked her quickly.

I then admitted to smoking marijuana to keep in constant touch with God, but at the same time I began to doubt this method of God realization.

“Where did you get the philosophy you were speaking back at the phone company?” I asked.

She calmly replied. “From the Hare Krsnas.”

I searched my mind for some information about the Hare Krsnas. I told her I’d read long ago in a popular magazine that their diet consisted of lettuce and walnuts and that George Harrison of the Beatles paid all the bills. I also saw them once selling books, incense, and oils at the Buenos Aires subway. She laughed at my poor description.

I then asked. “How do they get in touch with God if they don’t smoke marijuana?”

Since I was already chanting some words to help with my healing powers, this made sense to me. I thought. These Hare Krsna people don’t look like anyone else, so they easily could have something that no one else has, and why not exactly what I am looking for: the Absolute Truth? What wouldn’t I give for that priceless gift!

“Go live with them,” she said.

I felt far too ignorant of their philosophy to just walk in and say, “Well, I’m one of you now.” So I proposed that we spend a few days together so I could learn the basics of Krsna consciousness. She agreed.

We took a boat across the bay from Salvador to an island where she lived with some friends. For the next few days she taught me the basic philosophy, answered my questions, and gave me a Krsna book and a volume of Srimad-Bhagavatam. She showed me japa (chanting) beads and explained many things about the devotees’ life. I was fascinated. I bid her farewell and took a boat back across the bay and a bus to the temple.

I met the temple president Hankara dasa, who asked, “How did you get to know about us?” I briefly related my story, and he started explaining different aspects of the philosophy in a mixture of Portuguese and Spanish. I told him I wanted to become a pure devotee. Seated beside him was a young man with long hair (not as long as mine, but long enough to distinguish him from the shaven-headed devotees) who seemed absorbed in chanting on his beads, quite loudly, but also in listening to our conversation. I tried to appear unaffected by this strange sight.

Then came the prasadam (food that’s been offered to Krsna). To the girl, prasadam was a magic word. Yet despite her descriptions of celestial, divine, delicious prasadam. I thought it was terrible. But I silently ate every thing on my plate. Later I learned that the cook was new and that the food I’d eaten, except for the bread Hankara had made, was well below standard. Still, the philosophy was so satisfying that nothing was going to discourage me from living with devotees. They let me stay overnight not in the asrama but in the reception room. with no blanket or mat or pillow. My spontaneous attraction to the philosophy made them suspicious, and they were afraid I was just there to steal something or do something crazy.

They woke me for mangala-arati, the ceremony of worshiping the Deities that begins the day. That afternoon a devotee accompanied me to my hut. I wanted to pick up my belongings and tell my hut-mate the good news: finally I’d found the process of awakening the soul from the slumber of material illusion and the torture of mental speculation. But my friend had left

The next day, I rode the night bus to Recife, a city twelve hours north of Salvador, with the president of the Recife temple and a younger devotee. I was going there to join the program for newcomers. At about 9:15 P.M. the younger devotee asked me if I was chanting Hare Krsna. “Well, nobody told me to,” I said, “so I guess I’m not ready yet.” He laughed, gave me his own beads as a gift and taught me how to chant. By 10:00 P.M., after chanting three rounds, I fell asleep.