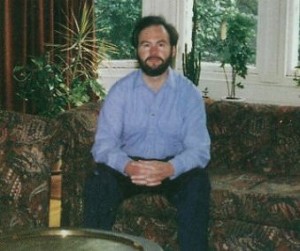 An uninitiated but committed member of ISKCON tells his story.

IN 1965, THE YEAR Srila Prabhupada landed in America, I was browsing in a used book store in Glasgow, Scotland, and came across a copy of the The Gita As A Chaitanyite Reads It, by one of Srila Prabhupada's godbrothers. I was eighteen at that time, with a very slight knowledge of the Gita and no knowledge of Caitanya Mahaprabhu, so I bought the book, took it home, and began to read.
That Gita lacked the clarity and power of Srila Prabhupada's Bhagavad-gita As It Is, but not knowing Bhagavad-gita As It Is at that time, I struggled on with Bon Maharaja's Gita until 1971, when I heard a strange sound in Glasgow's Sauchiehall Street. Later I would know that the sound was mrdangas (drums), karatalas, and chanting of the maha-mantra.
I followed the devotees at a little distance for about half a mile until they stopped chanting. During that half mile I seemed to be in some sort of ecstatic state; I didn't remember the time passing. When the chanting came to an end, I didn't speak to the devotees but went home to ponder what I had experienced.
Some weeks later I saw a devotee on the street distributing magazines. I stopped him and asked if I could have one, and was given my first Back to Godhead, the first of many.
A few months later, I met in the street a devotee named Kisora Dasa. He gave me the current BTG and started talking to me. Soon, we arrived at vegetarianism, and every argument I put forward for meat-eating he demolished.
At the end of the conversation, he asked, "Well, now you are a vegetarian?"
I replied, "Yes." And I was.
It took a few more weeks before I decided to visit the now defunct but not forgotten Edinburgh temple. When I got there I walked around the block three times, getting up courage to ring the bell and go in. Inside I experienced my first Sunday Feast and a day of lectures, bhajanas (devotional songs), and aratis (worship ceremonies). During the day, Kisora Dasa showed me the two-volume hardcoverKrishna books and asked me if I liked them. I said that I did, which he followed up by asking if I would like to have them. I replied that I would but that I had very little money with me.
To my surprise, he said, "Just take the books and pay me the next time you see me."
This episode was one of several that got me thinking and very quickly began to change my life. Kisora Dasa had already converted me to vegetarianism, and in this incident he showed me a level of trust and interaction beyond my experience in the material world. Before I knew it, I was chanting sixteen rounds* a day, following the four regulative principles,** and even sometimes distributing Srila Prabhupada's books, when my work and, later, family life allowed. I never did become an initiated devotee, but who knows, maybe some day yet.
Brian Fleming, a homeopath and an antiquarian bookseller, lives in Argyll & Bute, Scotland.
*Hare Krishna devotees chant the Hare Krishna mantra on a string of 108 beads. Chanting one set of 108 is known as completing one "round."
**No meat-eating, no illicit sex, no intoxication, no gambling.
Share This