Solace from the Pain of Loss 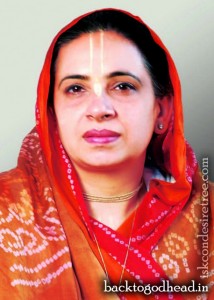 The loss of a loved one brought pain, philosophical inquiry, and soon Srila Prabhupada’s shelter.

The dark, foggy night of December 22, 1998 transformed my life. That night, death became real to me as it barged into my life and snatched away my dearest, most beloved friend: my father.
Born into an affluent family, I had trod on the path of life without ever stopping to ponder its meaning. I strived for material products, and happiness to me meant possessing worldly things. Basking in the love of my near and dear ones boosted my feeling of security. My world was a caring husband, two beautiful, affectionate children, and doting parents. What more could I ask from the Lord? Foolishly enough, I was enjoying this sunshine, thinking it to be eternal, forgetting that life is like a twig that can sway with the slightest breeze.
Surrounded by loved ones, we forget that we have higher goals to accomplish. Pain caused by the loss of a near one is the best of tutors. Although I was like other materialists in many ways, the spiritual principles of my childhood helped me learn from pain. As a child, I visited temples and gurudwaras (shrines of the Sikh community) and followed some rituals. I read the Guru Granth Sahib (the scripture of the Sikhs) regularly in the morning and evening, though without much comprehension.
My father was admitted to hospital for angioplasty. The doctors said the procedure was safe, but it ended in tragedy. When the doctors informed us that he was in critical condition, I prayed to God to save him. Although it might seem that those prayers were to no avail, I credit my position as a devotee of Krishna to that moment of my life.
I’m sure that my prayers must have helped him in some way in his last moments, but they revolutionized my life. The Lord started guiding me towards Him. My purification began when I decided at the hospital right after the doctors announced they were losing my father to become a vegetarian. I still don’t understand what inspired me to take that vow, but today I thank the Lord for showing me the way.
MY QUEST BEGINS
The pain of separation made me morose and flooded me with questions. Searching for answers, I writhed in pain. Still, I wondered why I had never asked the questions before. They seemed so basic, but it took thirty eight years for them to invade my consciousness: Who are we? Why are we here? Where will we go after death? And especiall y, who is God? The next six months, I traveled to various religious places in search of answers to these questions. I prayed to Hanumanji, to Lord Siva, to Durga, not for any material gain but for the answer to my main question: Who is God? As well as visiting temples and gurudwaras, I started reading the scriptures with great intensity.
VISIT TO SRI VRINDAVANA DHAMA

Srila Prabhupada has rightly said that Krishna sees our sincere endeavor to know Him. Krishna answered my prayers and pulled me to His holy abode.

On May 15, 1999, Krishna brought my family and me to Sri Sri Krishna Balarama Mandir in Vrindavana. Although I had resided in Delhi since birth, I had never visited Vrindavana. But now, in reply to my prayers, the Lord arranged for me to reach my destination to discover the answers to my questions.
After taking darsana of the beautiful Deities, we were guided by a devotee to Srila Prabhupada’s quarters. Srila Prabhupada is the siksa {instructing} guru for anyone who enters the temple premises with feelings of inquisitiveness and surrender. The devotee who showed us around Srila Prabhupada’s quarters narrated Prabhupada’s purpose behind establishing the International Society for Krishna Consciousness. By Krishna’s arrangement and mercy I got the answers to my questions. The sanctity of the temple and the blessings of Srila Prabhupada for doubt. Waiting for the evening arati meant spending a hot afternoon in May with our children outside the temple (the temple is closed in the afternoon), for a while on the stairs of Srila Prabhupada’s samadhi and sometimes on the floor of the guesthouse. When the temple reopened at 4:15 p.m, we joined the devotees in kirtana. The time flew, and at 7:00 p.m the grand Gaura arati echoed in the air with joyful kirtana and convinced me and my husband to start to follow his teachings there and then. We even took the opportunity to chant one round of japa around Srila Prabhupada’s samadhi. Krishna is so merciful that He let my husband support me fully; He gave us both the intelligence to come to Him. Krishna removed all of my obstacles on my path to Him.
Our guide requested us to stay for the evening arati to enjoy an “out of this world experience.” Sri Sri Radha Syamasundara wanted to bless me fully, leaving no room dance. The atmosphere was electrified; the melodious sounds of mrdangas and karatalas filled the temple hall. Everyone was involved, no one left out all feet dancing, hands clapping. Everyone was overjoyed at the sight of the Lord. It was amazing, indeed out of this mundane world, a spiritual experience beyond words. Both of us were now determined not to let the experience escape us. We departed with hearts filled with new found joy. I sensed in the deepest core of my heart that I had been fortunate enough to be blessed by the most beautiful Deities: Sri Sri Radha Syamasundara. I had left my heart with Them.
MEETING MY SPIRITUAL FATHER
Shortly thereafter we visited the small ISKCON center in Punjabi Bagh, near our home. It had been there for eighteen years but previously never appealed to us. Our destiny was to first receive the mercy of Srila Prabhupada in the holy city of Vrindavana. Wirhout guru krpa, the mercy of the guru, one cannot reach his real destination. Soon we were chanting sixteen rounds on our beads and following the rules and regulations Srila Prabhupada had prescribed. We could feel the mercy flowing in our lives. Then we met our would be spiritual farher, our guru maharaja, His Holiness Gopala Krishna Goswami. The love and compassion he showered made me forget the agony I was going through. I could now understand the real purpose of life. My mind could now comprehend the religious scriptures that I had previously read but never fathomed.
His Holiness Gopala Krishna Goswami accepted us as his disciples in 2001. Today I feel myself steering ahead on the safe road of Krishna consciousness. My own transformation has been enormous.
As Srila Prabhupada has rightly said, when in touch with the Supreme Lord we become aware of our abilities and can use them in the service of the Lord. I now give lectures on Krishna consciousness. Recently, I gave ten lectures in Pakistan, one at a program attended by eleven hundred people. I also spent three weeks in Sydney, Australia, where I spoke twenty times at various places. Last year, I was on television in India every day for four months, speaking on the Gita for fifteen minutes.
I am also a working woman, a fashion designer by profession. I design and produce Indian dresses, and I’ve begun designing outfits for ISKCON Deities. Last year I also published a book of my poems glorifying the Lord, Srila Prabhupada, and my spiritual master.
My husband is a businessman. He has an Ayurvedic medicine factory and deals in real estate. He also designs wooden altars.
We are both deeply grateful for the blessings we’ve received, especially the opportunity to serve the Lord. It all began with our contact with Srila Prabhupada through his temples and his Society. We encourage everyone to clutch his hand and toddle with us back to Godhead.
Radhika Kripa Devi Dasi is a disciple of His Holiness Gopala Krishna Goswami Maharaja. She is the author of Vaiglava teachings in Sikhism and a collection of devotional poems. From older articles.
Share This