Starting To See The Center Of Things

A simple explanation convines a young man to dedicate himself to a life centred around chanting the names of and serving God. 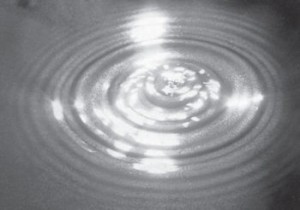 “Ever since the Stone Age, people have come up with so many nonsensical ideas to explain the forces of nature.”

That’s what my father, a Chicago lawyer, would tell me when I was growing up. “The idea of a God may give peace and inspire morality, but scientifically minded people are beyond all that.”
My seventh grade teacher showed me a different angle. He reasoned, “There are so many things we can’t see. We can’t see atoms or air or our own minds. Does that mean they don’t exist? Just because we can’t see God, does that mean He doesn’t exist?”
That made sense to me, and I had a change of heart. I didn’t exactly know who God was, but somehow I knew He was at the center of things.
Then, four years later (in my junior year of high school) , a close friend laughed at my ideas. “The wonders of nature are just coincidences. You’re just imagining that a God is doing these things.” His strong personality and arguments persuaded me to set aside my belief for the time being.
Still, I wanted some kind of perfection in my life, and I thought I could find it by studying psychology. I read books like Eric Fromm’s The Art of Loving, and finally I enrolled in Brandeis University’s psychology department so that I could learn how to help people get along better. But soon it became clear that most psychiatrists were themselves disturbed, and that their rate of suicide was surprisingly high. Besides, all the “experts” had different theories and rarely agreed on anything.
SEEKING THE EAST
Dismayed at not being able to find any peace of mind, I turned to the East for spiritual wisdom and looked for a spiritual teacher. For a start, I read about Zen Buddhism and also attended a weekend meditation led by a well known American Zen master. What an experience that was. All of us had to sit straight and stiff and play all kinds of mental games to empty our minds. We had to meditate on riddles like, “What is the sound of one hand clapping!” At times} when I fell asleep, a monitor would swat me on the shoulder with a stick. Needless to say, I felt uncomfortable. After the meditation, someone asked the master about Vedanta philosophy. He replied, “I have enough trouble keeping up with Zen. How can I think about Vedanta?” It seemed to me that a real spiritual teacher should know everything about spiritual life. So right then I knew that this man wasn’t the teacher I was looking for.
Later, I studied the writings of a famous Indian whom many people had called an incarnation of God. I asked one of my friends how I could study under him, but my friend told me that he didn’t accept any students. I thought, “What kind of master is this? Without accepting students, how can he benefit anyone? So that he can be detached he’s denying others the opportunity to be enlightened?” This didn’t make much sense to me, so I gave upon him.
Next, I became interested in a group that offered a popular version of meditation. Their leading American representative had rented a big hall in Cambridge to demonstrate the technique. But when I went there I found out that I’d have to pay an initiation fee of thirty five dollars and give up some kind of sense pleasure for one week. I wondered, “Thirty five dollars this is spiritual life? And if sense pleasure is bad, then why give it up for only one week?” It all sounded a little strange.
So it went. Whenever I found that a “swami” or “yogi” or “perfect master” or “realized soul” was anywhere within a thousand miles, I would rush to meet him. ‘”This ananda,” “That ananda” -so many anandas I met, but I always came away disgusted.
MEETING MY MASTER
Then, on April 18, 1969, His Divine Grace A.C. Bhaktivedanta Swami Prabhupada came to the Brandeis campus to speak on the Bhagavad gita. My girl friend tried to persuade me not to go. “Why can’t we be like other couples?” she asked tearfully. “Why do you always have to run to these swamis and yogis? Why can’t we be like everyone else?” I didn’t want to disappoint her, and I actually tried to forget about the lecture, but from within I felt I had to go. Not wanting to hurt my girl friend’s feelings, I reassured her, “Let me go to this one lecture, and this will be the last swami I visit.” 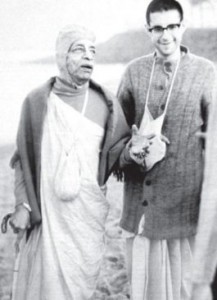 When one of my classmates and I entered the hall, the lecture had just ended. We saw Srila Prabhupada sitting on a magnificent chair in the middle of the stage.He was surrounded by chanting and dancing devotees. Satsvarupa Dasa, (now Satsvarupa Goswami) the president of Boston’s Krishna temple, led the enthusiastic chanting. As the sound system boomed the transcendental vibrations off the bare brick walls, I felt like jumping up and joining in. When the chanting ended, the devotees bowed to offer their respects to Srila Prabhupada. Then he left the stage, and a few disciples followed him.