His mother couldn’t supply satisfying answers to all his spiritual questions until she handed him a book she’d received thirty years before. 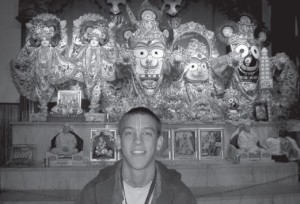 I WAS EIGHTEEN years old and happily enjoying life through the agency of friends, parties, adventures, sports, and so on. I had no real problems to face, nor was I depressed or unloved. My family loved me greatly, my friends deeply cared about me, and I’d never experienced suffering or loss, so things were just fine and dandy. The only negative thing was that I had no passion to do anything great or to take on projects and huge amounts of responsibility.

My only responsibility was to get myself to school and to pass with good grades. With this in mind, I decided it would be cool to study philosophy and religion because there is no right or wrong answer and I had everything already figured out, so I couldn’t mess up. I had always been a church going person and was active with my church’s youth group. I prayed regularly and felt like I had some commitment to God. But I didn’t really understand anything about God. That’s what philosophy and possibly other religions would teach me. Instead they just confused me about God even more and brought up a new conception: “the Absolute Truth.” I remained baffled for some time and kept on living the way I had been.

Now and again I would ponder life’s timeless question of what happens after we die. Fortunately I had enough intelligence to come to the conclusion that I was eventually going to pass on to the next life (even though, like most teenagers, I was still mostly convinced that I was immortal). I started to wonder what part of me would live on if I were dead. Then it struck me that the “me” I had been identifying with for so long would be gone. No more Ben, no more of my family, no more of my friends, no more 2003, no more America, no more Earth. It would all end. Something would live on, but not “me”. Maybe my essence, but not the “me” I identified with. (l was thinking that I was completely the body. I could not imagine that I was a living entity different from the body.)

These thoughts were overwhelming, and I had to find answers. I knew the best place to go for answers was my mother. She always knew everything well, except for how to do my math and science homework.

As I told her my thoughts, she assured me that I would be fine after death and not to worry about it until it comes. But I could not brush the subject aside, because the fact remains that we are going to die and leave these bodies, along with all of our identifications. The concept is real, and it was frightening.

My mother tried to console me by saying that our Savior would rescue us and bring us back to God. I had been studying philosophy and Eastern religions, but I knew very little about God as described by my Western faith. It mostly emphasizes the son of God. So I decided to get the full story from my mom.

My first question was “Who is God?”

She said, “The father of Jesus.”

I then asked, “What is His name?” She paused and thought res for a moment, then answered, “Well, I don’t know, maybe Yahweh or Jehovah.”

She responded, “Well, He doesn’t have a form.”

Then she paused and said, “Maybe He does, because it says we are made in His image.”

I realized she was as confused about God as I was. Afterwards she thought of a book to give me to read. No, it wasn’t the Bible. It was a book called Be Here Now.

She knew I had been studying Eastern religions, and the author explained God from the Eastern perspective that He’s all love and we should merge into that love. I didn’t like it one bit. I was looking for God because I didn’t want to give up being “me.” I didn’t like the Buddhist idea of becoming void, and I didn’t like the idea of merging and becoming love but not being a person. The idea freaked me out.

MERCY OFF THE SHELF

I wanted to go back to a kingdom where I could enjoy in God’s presence, as the Bible describes. So I cast aside the book and told my mom I didn’t like it. She could see that I was really trying to figure out who God was, and just then a light bulb went off in her head. (The Bhagavad-Gita says that Krishna is the cause of remembrance and forgetfulness.) She thought of a book she had gotten thirty years earlier. So we went to our book room, where she found it and gave it to me.

I gazed at the front cover with awe. It was a small blue book, and the title was strange because three of the letters h ad dots under them. It said Knna, and under that it said The Supreme Personality of Godhead.

“Whoa!” I thought. “I ‘vet never heard God called that before.”

The picture on the front was interesting, but I couldn’t quite t ell if it was two girls or a guy and a girl. I figured that one was a guy, but I wasn’t too sure who they were.  My mom said that back in the seventies there was a group of eccentric young people who claimed they knew God and this was one of their books. I didn’t really pay her much attention as I turned the book over to read the back cover.

As soon as I saw the picture on the back, I was stunned. The man I was looking at seemed situated in supreme peace. He glowed like a saint, and h e appeared to be so humble. His name was A.C. Bhaktivedanta Swami Prabhupada, but I didn’t know how to pronounce it. The greatest part of his name, to me, was that it included the words “His Divine Grace.” Simply by seeing his picture, I had sensed that he was divine, and now his title confirmed it. I read the book summary, and it was so simple and sweet. The phrase “relishable content for swanlike men” sunk deep into my heart. It was exactly what I needed to hear.

When I opened the book, I saw the foreword “Words from Apple,” by George Harrison. I liked how he described all names of God as being one.

As I read the first chapter, my heart melted and I was completely convinced that Krsr:ta was God. I just knew it. And why would this saint, Prabhupada, lie to me? I read the book every day, and it was so much nectar. I had no desire to do anything else during that time. I was just totally absorbed in reading about Krishna. Reading pastime after pastime increased my faith, and I felt like I was floating on a cloud. While I read the book- it was the first of three volumes and described only the Vrindavana pastimes- I was amazed and felt better than ever. My mind h ad expanded so much. I was opening up to new concepts of Godhead. I read about the qualities and energies of God and how He can expand and what incarnations He has. I had never thought of these things in my whole life. It was so incredible. I felt as if I was entering into the pastimes, and I could feel how Krishna and His associates felt.

Then I came to a part where Srila Prabhupada writes that persons who smoke ganja, thus imitating Lord Siva’s act of drinking poison, cannot enter into the kingdom of God. That really scared me. I was thinking, “Well, maybe Prabhupada has n ever heard of Jesus before.” I knew for sure that my sins would be washed away if I believed in Jesus. I had the best of both worlds. I now knew who God was, and I had His son as my Savior. My mind once again became peaceful. No more worries. Or was there more to come?

STRUGGLING WITH THE PRINCIPLES

A feeling of restlessness and dissatisfaction began to form within me. I mentioned to my friends that we should try to live a more pious life and go to church mo re often. But they were completely satisfied, and they assured me that the feeling would blow over. But I couldn’t stop thinking about this Krishna stuff and what Srila Prabhupada had been saying about living a godly life.  I couldn’t give up intoxicants, meat-eating, or women, as he suggested. But the thoughts kept coming back, and I figured that I had to at least try it for a day or two.

It was a difficult test. I couldn’t go long without getting intoxicated. Luckily, I didn’t have a girlfriend at the time, which made it easier to avoid illicit connections. I also n ever gambled with money, because I hated to spend it, let alone lose it on games. Then I tried to stop eating meat, but that didn’t last for more than a day. I couldn’t understand how people can eat salad all the time. I tried to give up intoxicants, but it was still a struggle. I was only able to cut back on my usage.

But then it happened-I actually started to stop getting intoxicated. My friends were shocked. They supported my choice, but they continued to take drugs in my presence, which made it tough for me. I had to shut them out of my life. It was really hard to do, but it was necessary. I had to prove to myself that I could follow these four simple principles.

Finaily it came time to give up eating meat. I told my mom about my des ire, and she totally agreed and even started cooking vegetarian meals for us. She had always wanted to try it too. I had also realized t hat my favorite food is vegetarian- I loved to eat cereal for every meal. Soon enough I was following all four principles. I felt strange but good about my accomplishment. I h ad occasional fall downs with intoxicants and meat, but for the most part I went a month straight.

WHERE ARE THE HARE KRISHNA’S?

To my disappointment she said, “Nope.”

She had not seen the Hare Krishna as for thirty years. She explained that t hey were a cult that came and went, along with many other religious fads of the era.

But I was determined to find out if there were some Hare Krishna’s left. I looked online for Krishna, and after seeing the number of web pages, I realized that He was a little more popular than I had thought. So I looked up ISKCON and found a site. I saw the List of temples, and I was so happy. I found the closest one to me and told my mom that I was leaving to go visit the temple. She wished me luck. I was off to change my life forever. I would like to thank my mother, who unknowingly became my patha-pradarsakaguru (the guru who shows the way). Little did she know when she received the Krishna book, so many years ago, that it would be the catalyst to send her son into a spiritual awakening. I would also like to thank the devotee who handed her the book, not knowing that that book sale would fructify thirty years later. Srila Prabhupada said that his books are like time bombs waiting to go off-to explode our material conception of life and bring us to the shelter of Krishna’s lotus feet. I’m glad to say that it’s true.