How I came to Krishna consiousness 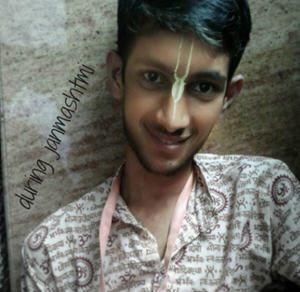 After this I was in deep search of a real teacher “guru” who will solve all my queries. Days past and like other boys I was also keen in making girl friend and hanging out with them. I tried to make as many girl friends as I could, but all those questions was always ticking in my mind and I was always looking for the perfect answer. My mind was full with questions like what is the real cause of our birth. Why am I born in this family? Why not richer family? Why there are so many gods? Why so many religion? What happens after death? And so on and on and on. I always wanted someone who can guide me and enlighten me about all of my queries. I began to search over internet, but I could not get a straight forward answer as everyone has different opinion and was really tough for me to understand what is right? and what is wrong? This entire thing made me an atheist and I thought that all religion is made for their own fulfilment. I started debating with the believers. One day in my tuition my teacher (who is a Muslim) showed me a video of Dr. Zakir Naik and his lectures on Islam and anti-Hindu and Christian scholar. After Few days he gave me a book written by the same Dr. Naik on refuting Vegetation Concept of Hinduism and pointing out from Vedas that meat eating is allowed in Hinduism (later I came to know the truth). My sir also gave me a “THE HOLY QURAN”. I started reading it in search of my answer, but I could not find a satisfactory answer.

My life changed when once I went with my so called Girl Friend to see “LIFE OF PI” movie, I showed about all the major religion and belief on one god. My mind became full of queries and questions and search for answer became very heavy on me. I don’t know what happened to me, as I left my girl friend there at once and ran out of the movie hall. I would have walked for about 10-15 minutes that I heard someone explaining the importance of “SRIMAD BHAGVAD GITA” on loud speakers. On inquiring from them I came to know that they were from ISKCON and they came to distribute GITA. That was the first day I came to know about ISKCON, the devotees looked very energetic and I thought they can give answers to all of my questions. One by one I started asking my questions and they gave the answers in very confident manner. I bought “SRIMAD BHAGVAD GITA” and started reading it as soon as I went home. I downloaded “SRIMAD BHAGVAD GITA” in mp3 format so that I could listen to them even on the go. I also went to ISKCON KOLKATA and there I first met a practicing devotee Mithlesh Prabhu, who introduced me to Mahesh Prabhu and who in turn introduced me to my SHIKSHA GURU H.G SUNDAR NIMAI DAS. So this is how I was introduced to Krishna Consciousness. It may be my good luck or my Destiny, whatever I may be but I am lucky enough to be under the guidance of my shiksha guru H.G Sundar Nimai Das. By the Lord Krishna’s and my guru’s grace I am able to follow the four regulative principles strictly.