The Great Good Fortune of Devotion to Sri Krishna
Coming from a life of farming, a young man seeks his true fortune in the preaching mission of Krishna Consciousness. 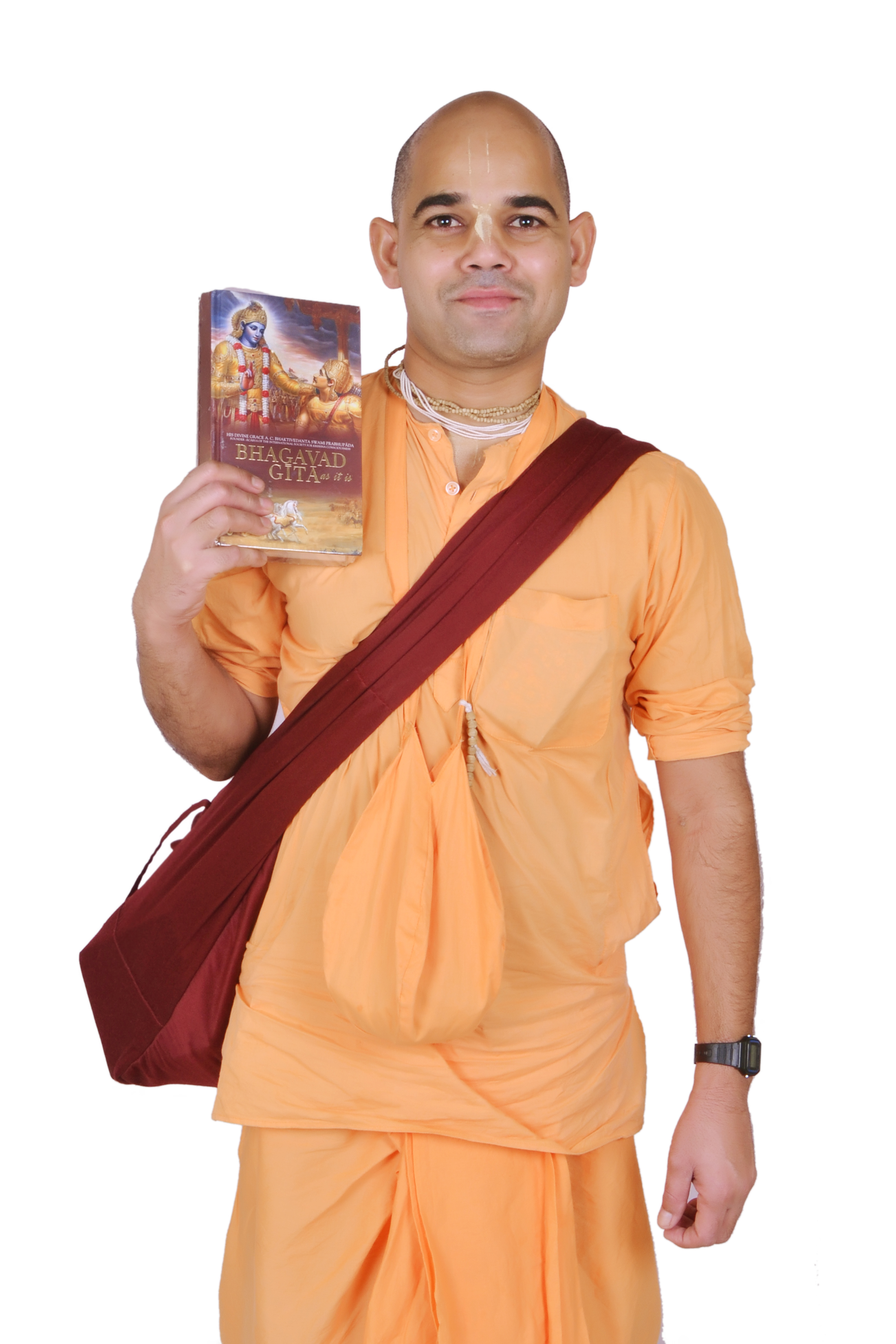 My birth took place in 1980 in Rajasthan’s Chittorgarh district, the in-laws’ place of 15th century great Krishna devotee Meera Bai. I was the eldest of five brothers and sisters. My father worked at the farm, engaging in the business of growing seasonal food crops. But, under the influence of modernization, the desire to earn wealth arose in me, which in 2005 brought me to Mumbai. Reaching here, there was not even a fixed place of residence for me. As I wandered about on the beach one day, someone informed me that a temple of ‘Hare Krishna’ devotees was quite nearby. This aroused my curiosity. It happened to be a Sunday. I reached the temple around nine in the morning. I looked at everything in the temple with great attention—the dioramas depicting the life of Srila Prabhupada, the pictures on the pastimes of Sri Krishna and the sweet darshan of Sri Sri Radha-Rasabihariji. All day long I wandered about the temple and also received the free prasada being distributed by the temple. In the evening I heard a discourse on Bhagavad-gita by Mangal Nilay das.  Thereafter I met with Dayasagar das who explained to me the basic principles of Krishna consciousness. I soon found a job with a company doing business with idols (murtis) and rented a room just ten minutes walk from the Radha-Rasbihari temple for my stay. I started coming to the temple very regularly in order to hear the lectures and participate in the kirtans, and for accepting the prasada – I particularly fancied the gulab jamun, rasagulla and sweet samosas.

A few days later, after one particular Sunday program, I was accepting prasada when I heard an announcement. Five copies of Bhagavad-gita were being distributed free of cost – first come, first served! I immediately jumped up and ran over to obtain for myself a copy of the Gita. Though I wasn’t much educated, I returned home that day and started reading the Bhagavad-gita. And, when I read there that simply by chanting sixteen rounds of the Hare Krishna mahamantra an individual can reach God, I easily felt encouraged. Right then I decided that I too have to find God. Immediately thereafter I went over to the temple, purchased a japa-mala, and started chanting eight rounds of the Hare Krishna mahamantra from the very first day. In this way about a year went by. By this time I was chanting sixteen rounds of japa, was following the ekadashi vows, as well as attending the various programs at the temple.

In 2006, on the occasion of the Janmashtami festival, I was given some temple service for the first time – managing the crowds of thousands that throng the temple. With all my mind and enthusiasm I performed this service. I felt that, in just those two days I had made more spiritual progress than in all the months gone before. This service to the Lord infused me with new zealm and an attitude of surrender. I felt for the first time then that devotion to Sri Krishna and the association of Krishna’s devotees will be the main purpose of my new life.

In January of 2008 I went to my village for my brother’s wedding. However, my life had already been transformed. Whomever I met there, I used to tell about the subject of Krishna consciousness with my newfound enthusiasm. Upon returning to the village I had decided to adopt the temple’s daily schedule in my day-to-day life. I prepared a small temple by putting up a picture of Sri Sri Radha-Rasabihariji on the wall. Every day I rose at 4:30 a.m. and performed aratis to Their Lordships, playing an audio CD disc and singing along with it the  mangala-arati, Nrsimha-arati and, Tulsi-arati songs; and, later, Gaura-arati song in the evening hours. This continued for the next six months. But life was not easy. I started becoming the target of sarcasm for the villagers. It has become a wrong notion among Indians that such devotion for the Lord is an activity meant for one’s old age. Seeing me aged only 25 but applying tilaka and chanting with japamala in hand became a source of amusement for the villagers. Often people would ask: Why are you chanting Hare Krishna, Hare Krishna all day long? Further, seeing my japamala bag in hand, a few would ask: Why are you roaming around with a bandage in your hand?

From one viewpoint I was utterly alone in the entire village, but my mobile phone gave me much support. Whenever I was at the farm, or alone herding the cows, I would call the devotees in Mumbai and talk with them. In the discouraging environment all around, the words of the devotees brought new energy to my almost lifeless situation. By this time I had decided to surrender my entire life to the service of God.  Everyone in the family was opposed to me, but I was determined. One day I opened my heart and explained things to my father, and then requested him to give me a thousand rupees for returning to Mumbai. By the Lords’ persuation he helped me and, despite the opposition of other family members, took me aside and gave me the amount as well as his own blessings. Even so I had fear of my mother and of my brothers. The next day I arose at 3:30 in the morning, performed mangala-arati, and started off from home. As I left, I kept the Srila-Prabhupada-chanting-mahamantra machine running so everyone at home would think that I was still sitting inside doing my morning japa.

Oh, but my trials were not yet over. While proceeding from Chittor to Delhi someone picked my pocket. There was not a paisa on me. Sitting at the Delhi railway station I started praying to Radha-Rasabihariji to call me to Their lotus feet. And by Their mercy – somehow or the other I reached Mumbai without a ticket. I knew that the new life being adopted by me was full of challenges, but with the help of Sri Krishna’s devotees everything can be possible.

In the year 2009, receiving initiation from spiritual master His Holiness Gopal Krishna Goswami Maharaja, my new, spiritual, birth took place. And at that time there was only one thought upon my mind: I shall go lifelong from house to house to distribute those very books through the medium of which I had received my own devotion to Sri Krishna.

By the mercy of Srila Prabhupada and Radha-Rasabihariji I have now gone forward and tried to distribute these books in shops, at railway stations and bus stands, in police stations, government offices, universities and colleges, and at every other possible place around.

In due course of time my mother and father also started appreciating my decision to accept a life of Krishna consciousness.

In just a few years, devotional service to Krishna has completely changed my life. As I reflect again and again on the fact that day after day I am receiving the association of devotees and the opportunity to accept the Lord’s prasada, I do appreciate my great good fortune. I have received the golden opportunity to live in the very house of Sri Radha-Rasabihariji for whose darshan people come from far and away.

I pray to Their Lordships that They give me the continued association and service of Their devotees by which this good fortune of mine shall last forever.