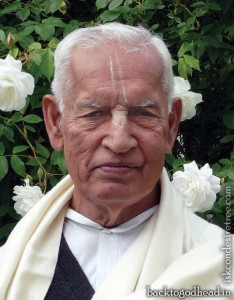 Early life experiences during India’s violent partition turn a young man away from religion.I Was Born in the part of India that is now in Pakistan, in the town of Multan, originally called Kashyapapura after the great sage Kashyapa Muni. In the 1940s, it was war torn with the partition of India. living in what used to be a peaceful area, we felt fear and tension as Muslim forces frequently came to attack the area and forcibly convert or kill people. a local well became known as the “women’s well” because so many women had jumped into it, committing suicide to avoid the atrocities or forced conversion or even rape.

For my parents, remaining Hindu was difficult. Resisting conversion was extremely hard and involved having to fake identity to escape the brutality.

Religion became secretive, and external Hindu worship was uncommon because of the associated risk. activities such as reading Bhagavad-gita were done in secret, and having a mürti, or deity, in the house was considered unsafe. My grandfather somehow managed to keep a small deity of gopala (Krishna as a cowherd boy) with him throughout the turbulent months.

the elderly members of the family would recite the names of god silently even after they moved to India, due to their conditioning from the experience of the partition.

My family members were on the last train out of Pakistan into India. It was the most overcrowded and suffocating experience, as people held on for their lives. the journey to India was some twenty-four hours. Our train was stopped many times with threats of slaughtering everyone on board. there was no food or water, and many plundered dead bodies were visible on the way. I was under ten years old.

A New Life in the West

In the 1960s I moved to london as a mathematics teacher. I was following a completely material way of life, thinking that way of life to be enjoyment and what coming to the West was about. also, my negative childhood experience with religion encouraged me to follow a material way of life.

after some time, however, I felt lost living in a new country and not having a strong faith or cultural identity to link with. One day I found a picture of lord Siva. I took shelter of this picture and started to pray daily: “Dear lord Siva, please show me the correct path in life.”

soon after starting that prayer, I met Srila Prabhupada.

I had visited many Hindu centers and institutions in london to find my religion. But I did not feel satisfied or fulfilled at any of them.

My prayer was answered when I made a random visit to a friend’s house. His tenants answered the door while on their way out. I asked where they were going.

“an English Hindu temple,” they answered.

I was intrigued and quickly asked where it was. they gave a vague indication of the location.

later that day I decided to find it myself. I went to the area and saw a church. I asked the priest outside if he knew where “an English Hindu temple” was.

He knew instantly that I was unknowingly referring to “the Hare Krishnas” and directed me to 7 Bury Place, the first ISKCON center in Europe.

I walked in and was astonished to see the worship of lord Krishna being performed with so much love and joy. I had never seen this before, not even in India.

the temple was a converted house. two rooms had been converted into one large room, which was the temple room, where the deities resided. although outside it looked like an ordinary house, inside it was beautifully decorated as a traditional temple, with carved wooden walls. Even though the temple room and altar were small, there were two sets of large deities: Sri Sri Radha-londoninvara (IsKCON’s first full-size Radha-Krishna deities), and lord jagannatha, lord Baladeva, and subhadra Devi.

gurudasa, one of the small group of devotees who opened the temple, was giving a class. I sat down at the back, silently observing and listening. after forty years I still remember his expression of dedication as he said that he would do anything to serve his guru.

I was amazed at the ability of that guru to have given people such strong faith and obedience. I decided I would keep returning to the temple until I met the guru.

Service at the Temple

I started going to the temple daily and asked for any service I could do to help. I would bring the temple groceries in my car and provide lifts for devotees, and some devotees would come to stay at our house, as there was a shortage of space at the temple. I also began chanting and soon found giving up meat, drink, and so on, not difficult because of the power of the holy name and the association of devotees, whose sincerity and dedication I admired. We would frequently chant through central london to Hyde Park (one of london’s main royal parks, from which the annual london Rathayatra starts).

I met Srila Prabhupada in 1970. I was most impressed by his determination to indiscriminately take as many people back to godhead as possible. He was radiant and totally selness.

the temple president at the time, tribhuvanatha Dasa, asked me if I would like to take initiation, along with my wife, Krishna Devi. My wife was very religious since birth and had accepted a guru before marriage. However, Srila Prabhupada’s mercy and the beautiful Sri Sri Radha londoninvara changed her very quickly from having been an impersonalist all her life to wholeheartedly embracing bhakti-yoga, or the path of devotional service. Srila Prabhupada re-initiated her, but not wanting to remove “Krishna” from her name, added “Kamala” to it.

We very much enjoyed the early days, being involved in the day-today service of cooking some of Srila Prabhupada’s favorite dishes for him, which in the early days were new to most western devotes, such as kerala (bitter gourd), bangan (small eggplant), and bindi (okra). We also transported Srila Prabhupada to preaching events in london and helped cook for thoUSAnds of people at london’s early Rathayatra festivals.

It has now been nearly forty years since our initiation by Prabhupada, and every day we feel blessed for the mercy he has bestowed upon the world by giving so much through his books and in the form of the lord’s holy name.