Punk and Krishna In a Teabag

“The Hare Krishnas shaved their heads like us, so they couldn’t be that bad.”

The following is dedicated to His Holiness Sridhara Swami, who asked me to write about this experience, my steppingstone into Krishna consciousness. He said it would purify me to write it and purify others to read it. Possibly some would relate it to a similar background. MDD 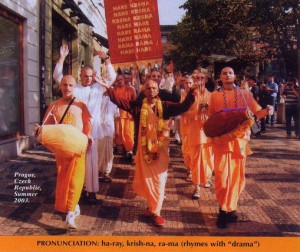 I was born in the darkness of ignorance, and my spiritual masters opened my eyes with the torchlight of knowledge. I offer my respectful obeisances unto them.

I grew up in a regular Western household in eastern Canada. My mother stayed home to raise me, and my father worked as a wildlife biologist. When I was eleven years old, my parents, like so many today, decided to separate. My mother and grandmother moved to British Columbia. I went to school and worked part-time while my single mother worked hard at her job and tried to make ends meet. She was now mother and father. Like any teenager, I listened to a variety of music. Searching to find something to relate to, I stumbled across a fast beat with aggressive, blunt lyrics. The messages were antiwar, anti-racism, anti-hypocrisy the list went on. It was the Punk Rock movement.

I had found something that blurted out the problems of the material world. No more generic love songs to band-aid the truth. Anarchy was much better than following lying, cheating political leaders, and we were going to tell the world what they needed to know.

The Punk Rock movement was similar to the hippie movement of the ’60s and ’70s. Yet the children of the next generation saw the need for a more radical and aggressive movement to take birth among the wilted daisies.

Soon I was going to see Vancouver Punk bands that played at various lower-eastside warehouses and bars. After shaving most of my head, I was coloring what was left of my hair and dressing as defiantly as possible. The music was angry but felt true in all its blunt, hardcore glory.

The gigs (concerts) were wild. Hurling my body off the stage into the “slam pit” (the slam-dancing crowd) was exhilarating and set my mind and pent-up frustration free, at least temporarily. We went to peace rallies and walks, some attended by Hare Krishna devotees. We went to anti-racism demonstrations, disregarded the police, and separated ourselves from the mainstream society as much as possible.

I had found a lifestyle with truth, rebellion, and spunk, yet somehow the frustrating material world, along with a headache, still appeared with the dawn each day.

One day, as I was walking through downtown Vancouver, I heard a ching, ching, ching from across the street. As I approached the corner, a Hare Krishna devotee emerged from a chanting party and handed me an invitation card to a Sunday Feast.

“No thanks!” I said sharply. “I don’t take pamphlets from strange men who wear bed sheets!”

With that, I smugly walked off, snickering with my friends.

A year later, I was once again walking through downtown Vancouver with my friends when I noticed a strange-looking storefront. In the window was a small diorama of the cycle of birth and death along with some books.

On a self-dare, I ran in, peeked through the beaded doorway, and rushed out. Just as my foot left the doorway, a devotee stopped us in our tracks with a “Haribol! Are you hungry?” And, “Come on in. We have a free feast every Sunday.”

We loved the freaky look and the wonderful exotic smells and decided to go in. Besides, they shaved their heads like us, so they couldn’t be that bad.

After that first time, I would visit a couple of times a month with different friends each time. I recall getting a flower garland or a stick of incense once in a while. I always left feeling elated.

Off and on over the years I would see devotees, running into them here and there. I’d sometimes invite them to my apartment, which was in the middle of downtown. The devotees would bring pizza and halava prasadam, Srila Prabhupada’s books, and kirtana. I always looked forward to going to the Rathayatra every year or two. It just felt right.

Years later I moved into the country with a boyfriend. As I uselessly pursued the domestic life, there came a day when I woke up with a powerful feeling: “Is this all there is to life?” I had been in the relationship for six years, had no future plans, was working in a dead-end home business, and, worse yet, had been eating fish and chicken after being a vegetarian for eight years. I felt I was on the wrong path.

In the mornings, I enjoyed playing my karatalas to one or two kirtana tapes. If I played them in the car, there would almost always be a volume war between the boyfriend and me. I had contact with one devotee family who had never given up on me. That was Yamala Arjuna Dasa and his great wife, Lilamrta Dasi. They would always keep contact via the mail, and I treasured opening the mailbox and finding a big letter with pictures of Srila Prabhupada and Krishna plastered all over the envelope. It seemed to glow in the dark mailbox. These were the same devotees who had given me my first taste of prasadam.

One day I got up and made my usual cup of morning herbal tea. Each teabag came with a little message attached to the teabag string. That morning it read, “Those who don’t remember the past are forced to repeat it.” It hit me hard and motivated me. It reminded me of karma, and karma reminded me of Krishna consciousness. It was time for me to make some major changes.

My mind took off. I thought for weeks about the feeling welling up inside of me that something was missing and that the material world is a jungle of dead ends, boredom, and temporary existence. I thought about the blissful feeling I had after listening to a kirtana tape or smelling the fragrance of flowers and incense permeating the air at the devotees’ downtown center and at the temple.

I remembered the peaceful feeling deep in my soul as I walked through the Rathayatra parades. There was the mist of scented rosewater sprayed on the crowd of beautiful devotees to cool them down in kirtana. There was the deep resonating beat of the mrdanga drum pounding through my stone heart. I remembered seeing Jagannatha, Balarama, and Subhadra on their cart and the devotees pulling them along the beachfront road. The deities seemed to be playing a transcendental game of peek-a-boo to increase the devotees’ love for them. The billowing clouds of frankincense would dance in front of the Lord and then be cleared away by the strong winds from the ocean. There were stacks of flowers and fruit at the Lord’s lotus feet. I thought that anyone who had missed this experience had to be out of his or her mind. What could compare to this? I remembered how beautiful and happy the devotees looked. I remembered the smell of tilaka and the first time I had put some on. Could I put this on every day? Could I really become a Hare Krishna? Was this what I’d been missing all my life?

I had come to the realization that my redundant cravings for the Punk Rock lifestyle would never give me a solution to the frustrating and twisted way of material life. I was sick of the record skipping in the same groove of life, and I craved the reality of Krishna consciousness in all its beauty and purity. 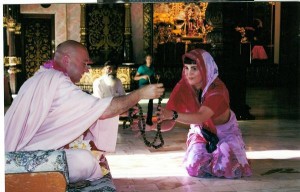 When I had made my decision, I couldn’t move fast enough to leave the relationship and the home we had bought together. I went to a trade school and was a nail technician for a short time while doing some service in the garden of the Vancouver temple, New Gokula Dham. Before I knew it, I was working at Govinda’s Restaurant and had moved a few blocks from the temple. I felt at home at last.

I’ve had many spiritual masters on this long journey. In 1996, I met His Holiness Bhaktimarga Swami, and by his mercy I received first initiation in 2000 and brahminical initiation in 2002. I feel extremely grateful to be able to personally serve Lord Jagannatha, the Lord of the universe, as His pujari, after seeing Him from afar for so long. Krishna has allowed me to serve many wonderful devotees. Krishna has also allowed me to marry a wonderful devotee, and we have three sons. We feel truly blessed.

Had Srila Prabhupada not fulfilled the order of his spiritual master and brought the glorious gift of Krishna consciousness to the West, there would be many more frustrated souls searching in a desert of darkness, hypocrisy, and repetition. Srila Prabhupada has given us Krishna consciousness in all its glory. It’s the greatest gift the material world will ever receive.
Share This