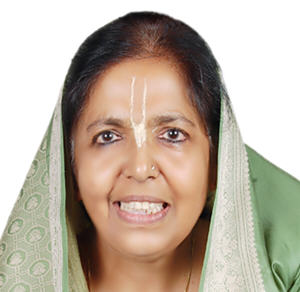 My first exposure to Prabhupada was five years ago when I just casually  dropped in at the ISKCON temple at camp Pune. There were tables there distributing books and I bought “Teachings of Queen Kunti”.

I read it and was amazed at Prabhupada’s clarity  of thought and how brilliantly he elucidated Krishna Consciousness.

That was  the day and today – I am still reading Prabhupada’s writings – be they his purports in Bhagavad Gita, in Bhagavatam, and his articles in Back to Godhead.

Every word, every sentence has so much clarity and logic.

I had a chance to attend Prabhupada’s lecture at Cross Maidan in Bombay when he first gave a talk in Bombay. I saw the ads. And the venue was so close to my house. But I did not go. So fallen I am.

Now I know the value of Guru.

I bow to his lotus feet with great awe and reverence.

By his grace one can cross the ocean of material suffering and obtain the mercy of Krishna.