When her son joined the Hare Krishna movement, she didn't make any judgments without finding out for herself what it was all about. 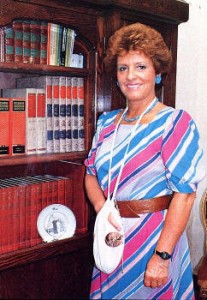 Mrs. Caprario de Tarres, who holds an important position in the government of Uruguay, originally wrote the following article to counter attacks by anticult groups against the Hare Krishna devotees in that country. Her letter helped calm the criticism and enabled the devotees to freely practice Krishna consciousness.
My son Enrique is twenty three years old. About three years ago, in search of new opportunities, Enrique moved from Uruguay to the United States, to my brother's home in Texas. Once settled there, Enrique had no difficulty finding a job. Indeed, he was able to change jobs whenever he found another offering better pay and better opportunity, and so, from a material point of view, he was very satisfied. But still he found something lacking in himself.
One day he called me to tell me he had joined the Krishna consciousness movement, that he now lived in a temple in Dallas, and that he felt very happy being with the devotees. Enrique begged me not to form any opinions or make any judgments without first being informed of what the Hare Krishna movement really was. He suggested that I get in touch with the devotees in Montevideo, and he sent me their address.
Immediately I wrote to the devotees, and in a few days a young man from the temple came to my house. During a very profound and mature conversation, he explained in depth the basic precepts of Krishna consciousness. From that day I tried to read everything I could on Krishna consciousness and began regularly visiting the temple in Montevideo, where I witnessed the life of austerity and service the devotees led. For the first time in my life I saw people who tried in every possible way to obey the divine laws to not only recognize what is sinful, but avoid sinning.
The devotees treated me with great respect. I always felt very comfortable in the atmosphere of peace and sincerity I found in the temple. I believe my feeling of well-being stemmed, above all, from the fact that every time I asked a question for example, at the end of a class on Krishna consciousness philosophy they would always answer with clarity and coherence. Up to now, I can say that nothing in their answers seemed to me illogical or unbelievable. It's wonderful to receive consistent answers to everything, to find that there are no mysteries, and to have the deepest questions of my soul satisfied. I believe that affords the greatest peace of mind, the greatest interior satisfaction to any person.
Last year I went to the United States to be present at Enrique's initiation ceremony at the Hare Krishna temple in Los Angeles, where he now lives. The experience was a marvelous and unforgettable one, both for the initiation itself, as well as for the days I spent in the company of the devotees, who accepted me and treated me like an old friend.
During my stay I spoke with many young devotees who told me about their former lives, when many of them lived as hippies and drug addicts and angry punks, something I found hard to believe, looking at them as they were now calm, serene souls dedicated to Krishna conscious spiritual life.
Some of them told me about their coming to Krishna consciousness, and of the ill will in some cases from parents whose minds were closed to everything that didn't fit their ideas or ambitions for their children. I learned that some parents attacked everything without any understanding, without even bothering to visit the temple and see what went on there, see how their son or daughter now lived. Some parents of devotees never even visited the temple or stayed some days with their children, although they were invited to do so.
This particular reaction of some parents to their children's becoming Krishna devotees was probably the only thing that clouded the happiness of these young people. Like my son, they had found satisfaction in living in a devotional way, a way of service, and they were happy with it. Naturally they want their parents to appreciate that and share their happiness, even if their parents don't take to Krishna consciousness.
I had many talks with my son, who now went by the spiritual name he had received at initiation, Caitanya Nrsimha dasa. We took long walks together in the neighborhood, and sometimes we dined at Govinda's, the devotees' vegetarian restaurant. Sometimes we sat in the temple gardens and talked at length. At all times there was a good sense of communication between us. In our family in general, we've always been close to each other, but it wasn't always that way with Enrique, perhaps because of his temperament.
But in Los Angeles everything was different; it was much better. We had no misunderstandings like before. I found him a clear-headed human being, dedicated to spiritual growth, with a grand tolerance and understanding toward everyone. I was able to ask about whatever doubts I had and about the things I didn't understand relative to his faith. His replies were all thoughtful and convincing. It proved to me the seriousness with which he studied the path he's taken.
The trip was certainly a valuable experience for me. The impression I received from talking with my son and with the devotees is that theirs is a serious undertaking, that they have deep knowledge about the life they preach, and that if a person tries to hear them out, to see them as they really are, see beyond their unconventional manners and ways, it will not be very difficult to understand and appreciate them and simply recognize that they carry the message of God.
Share This