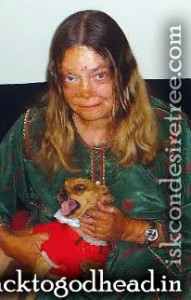 Adversities and a natural attraction to spiritual things prepared her to receive the Gita with eagerness and hope.
I was born and raised in Butler County, Ohio, USA, not far from the river city of Cincinnati. I loved reading and read nearly everything I could get my hands on. I borrowed and bought all genres of books, read more than just the comics section of the newspaper, and somewhere along the line became interested in spiritual things.

I had a wonderful grandfather who read the Book of Romans from his King James Bible nearly every day, and I became intrigued by how one book could hold his attention so. One day I found myself reading that same book, and I couldn’t put it down. I loved the stories about Jesus, and he quickly became my hero. After reading the Old Testament, though, I decided I wasn’t much of a fan of Jesus’ father. In my eyes, this God was as dysfunctional as my family. I recall being warned, “If you act bad again, God could squash you like a bug!”

In 1976, at the age of seventeen, I married Dennis, a boy I’d met in high school. I soon gave birth to two beautiful daughters, Angel and Sara. After my husband’s failed stint in the United States Marine Corps, my older sister and her husband adopted our girls, and Dennis and I hitchhiked to California in search of a fresh start.

We arrived in Glendora at his uncle’s doorstep in December 1979. Shortly thereafter we got our California drivers licenses, jobs, and our own apartment in Azusa. We worked and partied, partied and worked, but the day came when the party was finally over.

Blasted from My Home

On February 3, 1981, Dennis blew out the pilot lights and turned the gas on in our apartment in an unsuccessful suicide attempt. The next evening, unaware that the gas had accumulated near the ceiling, he lit a cigarette and our world literally exploded. It was the loudest sound I’ve ever heard, and the hottest fire this side of hell. I jumped out our second-story window and landed on my head. After the front door burned down, my poor Dennis crawled outside. We were horribly burned. He died sixteen days later, and I barely survived. I was hospitalized for most of that year, and had frequent surgeries thereafter for several years.

A Gift of the Gita

In 1983, I was sitting on the passenger side in a green station wagon in the parking lot of a local supermarket, waiting for a friend. A young man walked over to me and asked if I’d like a free book. The reader that I am, I said yes. He handed me a copy of Bhagavad-gita As It Is. I thumbed through it, and the first thing I discovered was the pictures. Beautiful pictures! I think I fell in love with Krishna consciousness at that moment. I knew I had to read that book.

And read it I did, over and over, not totally comprehending what I was reading, but feeling comfort anyway. The book kept mentioning a spiritual master and the importance of having one. I thought that if I had one of these spiritual masters, then I would better understand spiritual things and the book.

I wound up at a local ashram and took discipleship from their supposed spiritual master, who claimed she could teach me the Gita. I followed her for nearly two years. But I made a hasty exit one morning after things got really crazy and, in my eyes, highly unspiritual. She said that leaving her would be spiritual suicide, but I ran away anyway. Though I believed her, and considered myself a goner, I continued to read the Bible and my Gita.

In the summer of 2005, I started taking classes at Long Beach City College as an English major. Soon I was introduced to a young man named Jun, who noticed my old Gita sticking out of my pocket. Jun asked me about my involvement with the Gita and Krishna consciousness, and then invited me to go to the ISKCON temple he attended in Los Angeles.

He picked me up one Sunday around three in the afternoon, and we drove to the temple on Watseka Avenue. It was wonderful. Everyone was so happy, joyous, and kind. I was taught the maha-mantra, and for my birthday that year I got japa beads and a bead bag. I started chanting regularly. I also gave up meat, fish, and eggs and began offering my food to Krishna. A devotee named Govinda was great at helping me pick out which books to buy.

I started going to school early so I could do Internet searches about Krishna consciousness. One day I came across “The Spiritual Revolutionary,” the website of the ISKCON devotee SaõkarΩana Dasa Adhikari. He had an e-mail course on the Gita, so I enrolled. I started sending him my questions, and he always kindly answered them. Over time, I began depending on him more and more. I already knew the rule against meat-eating, and he taught me the other three “regulative principles” that ISKCON devotees follow. Whenever I’ve had trouble, he has given me helpful suggestions. I look forward to meeting him soon, and I hope to take initiation someday.

Coming to Krishna consciousness is a continuous progression for me, and as I learn new things, I put them into practice the best I can.

Since that first encounter with Jun at school, my progress has been steady. And I love every minute of it. I’ve learned to get up early in the morning to practice my spiritual disciplines and to chant and pray. I watch the morning lecture at the Los Angeles temple live on the Internet. I can even use the chat box to ask questions about the topic of the lecture. I’m learning so much and will be forever grateful to the young man who handed me that Bhagavad-gita in the supermarket parking lot so many years ago.