A Peace Corps worker on assignment in India resolves to follow the transcendental call.
One hot smoggy day in the summer of 1968, I went for a walk in New York's Greenwich Village, browsing through the occult bookstores. As I stood inside one store, reading a small pocket copy of Bhagavad-gita, I saw an incredible sight: a group of young men and women in robes and saris, dancing double-file down the sidewalk. The men had shaved heads, and they were playing clay drums and cymbals. They were singing a song that they repeated to a simple melody, and it seemed to me I had heard this song before. I was very attracted. 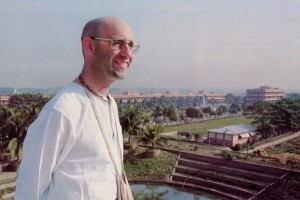 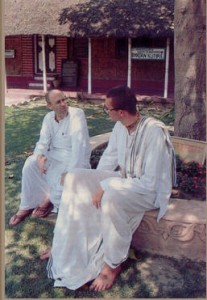 Each evening I would go to Srila Prabhupada's hut. How fortunate I was, I thought, to have come in contact with this person. Slowly, methodically, he was removing all of my misconceptions, bringing me to the platform of a sincere, inquisitive student of spiritual science.
One evening I took a walk along the front of the property. The moon was full, illuminating everything, and the Ganges shimmered in the distance like a thread of silver. A mild breeze blew, and the atmosphere felt somehow purifying. Walking alone, I began to consider how my consciousness was changing. Looking back on my life, I could see how kind God had been to me; it seemed that every stage had been a step in His plan to bring me to this point. I stood by the side of the shining Ganges, watching her flow down to the ocean. Yes, I thought, now I must begin my journey back to Krishna.
The next evening as we gathered at Srila Prabhupada's feet, I tried to explain that I would be leaving the next day to return to my work. Nervously I said, "Tomorrow I'll have to leave you and . . . "
Looking lovingly at me, he said, "Don't talk l-e-a-v-e, but talk l-i-v-e." Inconceivably, he seemed to address my soul directly. I suddenly became overwhelmed with love and appreciation for him. I felt such emotion that I had to excuse myself. Sitting down on the edge of a rice field, my eyes brimming with tears of happiness and relief, I knew my life would never be the same again. Srila Prabhupada wanted me to become a devotee, and I knew deep inside that this was all I had ever wanted.
Although I returned to my work with the Peace Corps, I spent as much time with the devotees as possible. Finally I returned to New York. The devotees assured me that there was a temple in New York and that Srila Prabhupada would come there to visit. I wrote to Srila Prabhupada and explained what I was doing. I felt that by writing I had a direct link with him.
Within a week I received his reply:
My dear Bob,
Please accept my blessings. I thank you very much for your letter dated June 12, 1972. I have noted the sentiments expressed therein with great pleasure. I am very glad to hear that you are associating with us. I know that you are a very good boy, very intelligent, and your behavior is gentle, so I have all confidence that very quickly Krishna will bestow all His blessings upon you, and you will feel yourself becoming perfectly happy in Krishna consciousness…. Any man with a good scientific and philosophical mind, like your good self, must first appreciate what transcendental knowledge is…. To get knowledge is the first item for anyone who is hoping to find the perfection of his life….
We are just now typing up the tapes of those conversations we held in Mayapur, and we shall be publishing them as a book. It will be called "PERFECT QUESTIONS, PERFECT ANSWERS." . . . I shall be very much engladdened to meet you in New York once again.
Your ever well-wisher,
A.C. Bhaktivedanta Swami Prabhupada.
This was a great surprise. Srila Prabhupada considered the questions I had asked in my foolishness and ignorance to be perfect transcendental inquiries! It was an incredible honor, although I felt somewhat embarrassed.
A month later Srila Prabhupada came to the New York temple. I went with my wife, Barbara, wanting her to meet him. Srila Prabhupada entered the hallway, and we all scattered flower petals and bowed down to offer respects.
In my heart I was feeling very much ashamed, because although I had received so much instruction and encouragement from him, I had still not fully committed myself. I felt that I was letting him down. As he approached me, I bowed down to the floor, hoping that he would not see me. I kept my head down and offered the Sanskrit prayers very slowly. After saying the prayers, I raised my head, thinking he had passed by. Then I saw two bronzecolored feet before me, and I looked up to see Srila Prabhupada's beaming face.
"Oh, it's you!" he exclaimed as I rose to my feet. He put his arms around my shoulders and gave me a welcoming embrace like a loving father. Everyone gave a loud exclamation of pleasure and jubilation that I had achieved such a place of affection in Srila Prabhupada's heart. He had literally embraced me into his fold.
Two years later, when my wife and I were fully ready, Srila Prabhupada accepted us both as his formally initiated disciples.
Share This