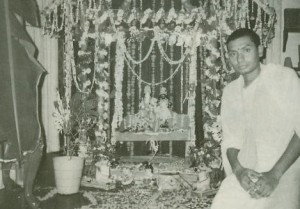 CALCUTTA, 1985. It was my final year in primary school, and I was visiting my grandmother. During my stay with her she happened to call a man who buys old newspapers and magazines. I helped her take out the bundles, and as I stood watching the man weigh them and bargain with my grandmother, my glance fell on a glossy English magazine named Back to Godhead. On the cover was a picture of smiling Gopala (Krishna) with a flute in one hand and a calf tucked under the other arm.
Out of curiosity I started looking through the pages. The pictures were of a strange sight foreigners with shaven heads and wearing Indian clothes. I wondered what it was all about. I noticed other issues of the magazine, so I picked them up from the pile and took them to my grandmother’s living room for a closer look.
The first article I read was entitled “The Final Point for the Bubble of Illusion.” The author was His Divine Grace A.C. Bhaktivedanta Swami Prabhupada. It was an explanation of a song by Acarya Narottama Dasa Thakura. The song begins hari hari! vifale janama gonainu: “O Lord, I’ve wasted my life!” I liked the article as much as my knowledge would permit, and I decided to take the magazines home with me.
Back home I read them over and over again, each reading bringing new realizations. Although born and brought up in India and therefore familiar with Krishna and some of His childhood pastimes, I didn’t know that Krishna was the Supreme Personality of Godhead and that He had appeared in the Age of Kali as the Golden Avatara, Caitanya Mahaprabhu.
I was so carried away by the magazines that I stopped drinking tea and coffee and decided to become a vegetarian. I even started chanting Hare Krishna. Becoming a vegetarian was not easy; it took me about eight months to leave meat-eating altogether. I didn’t know much about chanting, so I just chanted the Hare Krishna mantra on my fingers 108 times every night in bed, trying to experience the feeling of “going back home,” as promised to me in the articles.
In December 1986 I went with my parents to Mayapur (about three hours north of Calcutta) and stayed at the ISKCON project there. I made friends with some of the devotees, talked with them about Krishna consciousness, and bought a copy of Bhagavad-gita As It Is.
After that trip, I had no contact with devotees for almost four years. But I kept chanting Hare Krishna and following a vegetarian diet. In July 1990, now in college, I was aimlessly going through the campus notice board when I saw an advertisement for a student seminar in Mayapur. I decided to get in touch with the organizers. I noted their address.
A few days later I made my way to the first floor of the “Mona Lisa” building, where I met Bhakta Sanjay (now Sahadeva Dasa) and Gauranga Dasa. As we talked about the seminar, I made up my mind to attend. But getting my parents’ permission would not be easy. This would be my first time out on my own. But after a lot of arguments, they finally allowed me to go, on the condition that I take a friend along.
Mayapur was a whole new world, a world I could easily identify with. When I returned to Calcutta, I became a member of the Calcutta temple’s youth group, Bhaktivedanta Youth Services.
Gauranga Dasa later told me that although the devotees had put up hundreds of advertisements all over Calcutta, I was the only new person who responded. Everyone else on the trip was already a BYS member.
When I look back I thank Krishna and Prabhupada for sending me those Back to Godheads. Because of those magazines, my life is a thousand times better.
Bhakta Amit recently completed the preacher training course offered by the Vaisnava Institute for Higher Education (VIHE) in Vrindavan. He is helping spread Krishna consciousness in Calcutta.
Share This